A jerk, but a fascinating one

I’m pretty sure Paul O’Connor listened to this audio book about Steve Jobs on his iPhone. I edited this review on my Macbook. It’s interesting to learn more about a man who had such a major impact on our lives.

Was Steve Jobs a jerk? 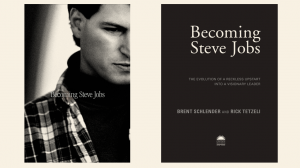 Since the Apple co-founder’s death in fall 2011, that question has persisted in the discussion of his life and role in the digital technology revolution.

Walter Isaacson, in his authorized 2011 biography, argued a convincing case that, yes, Jobs was a jerk. He wasn’t alone; conventional punditry was not kind to Jobs.

Brent Schlender and Rick Tetzeli, two Fortune magazine journalists who covered Jobs for 25 years and knew him well, had a somewhat different view.

Yes, Jobs was a jerk, they write in Becoming Steve Jobs, The Evolution of a Reckless Upstart into a Visionary Leader. But not all the time.

The overwhelmingly negative reporting on Jobs’ life upset many of his friends and co-workers, so they granted interviews to the authors, hoping to tell the other story.

The result here is still an indictment of Jobs.

He was arrogant, immature, lavish in his spending, passive aggressive, meddling and egotistical. He had a quick temper and was prone to belittle people who didn’t meet his standards, or whose work didn’t. He was a shit to his daughter, whom he disavowed after her birth, and to some of his earliest employees, whom he cut out of the first big financial bonanza at Apple.

But, few among us are all bad. And the angle of this book is that Jobs grew as a person, as a businessman and as an artist. He made amends with his daughter, becoming a good parent to her and to her step-siblings. He was generous to his employees both financially and in personal support.

As current Apple CEO Tim Cook is quoted as saying late in the book, no one as selfish as the Jobs depicted in the popular press would have been as generous, as supportive or as beloved as Jobs.

For those not eager to read or listen to a long book about a jerk, or a sometimes jerk, our authors still provide a fascinating story. It is a history of the personal computing industry from the mid-1970s when Jobs and his first partner, Steve Wozniak, began designing, building and selling Apple computers.

My favorite chapter focused more on Bill Gates than on Jobs, on how Gates recognized that by seizing the market for his operating systems and software he put Microsoft at the center of the industry. In a later chapter, the authors explain how Gates unwittingly outlined the future path of Apple’s ascendancy, the computer at the center of a hub of digital products for music, video, personal computing and telephone. Gates envisioned it as a course forward for Microsoft, although we can see today that it was a challenge for which his company was not suited.

It would be Jobs and Apple who brought digital technology to individual customers, providing them with devices that they didn’t know they wanted but that eventually enriched their lives.

The book is a great read or listen, but the authors’ choice to tell the story in the first person singular is annoying. The reader never knows who is writing, whether the “I” involved in one story or another is Schlender or Tetzeli.

But don’t let that stop you. This book is worth a read or listen.