While I’m still more or less in holiday mode, Tom Dillon is back to business with a review of what threatens to be the last in one of his favorite mystery series. He’s right: It’s time to get things going for 2015. My New Year’s resolution is to be as industrious as Tom! 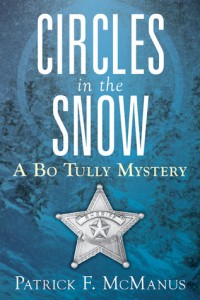 Well, darn it, I’ve apparently done it again. I’ve enjoyed Pat McManus’ Bo Tully mysteries ever since the first one appeared some 10 years ago, and now Bo Tully is planning to retire as sheriff of Blight County, Idaho.

The same thing happened to the last lawman I got interested in, a Scottish cop by the name of John Rebus. Get drawn in by a particular character, and then he retires. I seem to have a penchant for this.

It’s all better than what happened to Sherlock Holmes, of course – he fell off a waterfall fighting with his archenemy, Prof. Moriarty, you remember – but still I wonder. Am I a jinx? Should I even be reading mysteries at all?

It’s clear that Tully is getting a little long in the tooth, though he can still clobber a couple of bikers trying to have a knife fight in a Blight County drinking establishment. Tully is nearly 50, he’s a bit stout, and he’s long wanted to quit sheriffing and devote himself to his love for painting. But the demands of the job haven’t allowed it.

In this new mystery, Tully is confronted with the murder of an unpleasant character, a rancher known for shooting bald eagles. In this case, the rancher himself is done in by an archer using arrows fletched with eagle feathers. Bo and his father, former Sheriff Pap Tully, find the corpse beneath a new-fallen snow.

There are lots of suspects, starting with the rancher’s wife (an archer herself), his foreman (who’s in love with the wife), a budding ornithologist who chefs at a house of ill repute, and others. It will be Bo’s job to figure out who the culprit is.

Along the way, we get a trip to Mexico by Pap and Bo’s one-man CSI unit, Byron (Lurch) Proctor, some insight into how arrows are made and an introduction to August (Augie) Finn, editor and sole reporter for the Silver Tip Miner newspaper. Personally speaking, I wish we’d met Augie before.

There’s also the local FBI agent, a blonde knockout named Angie Phelps. She gets along OK with Bo, but she has some questions about Blight County, one of those places where the lawmen may shoot first and ask questions later, and where the sheriff can bend laws that need bending. The first in this series of books was called “The Blight Way,” and that phrase stands.

And then there’s the mystery of the circles in the snow, perfectly formed circles that show no footprints in and no footprints out. It’s as if someone formed them using a giant protractor – “kind of spooky,” in Pap’s opinion.

I tend to think that McManus could profit by reading more of Agatha Christie; some of these mysteries are all too fast-paced. But I’ve enjoyed all of them; I think it’s now six, dealing with everything from avalanches to trout fishing to 19th century mining. I hate to think the series is ending.

Toward the end, Bo starts talking about setting up his own private-detective business, a way, I guess, to keep his hand in law enforcement and maybe support his artistic efforts. But will he really need that? Early on here, he sells a painting for $12,000 and has his work featured in a big urban art gallery. He seems to have it made.

I guess we’ll just have to wait and see. Sherlock Holmes came back from the dead after readers protested, and John Rebus is still working, retired or not. Is Bo Tully really gone from the scene? Thus far, Pat McManus isn’t saying.