Paul O’Connor’s amazing (?) feat of reading Moby-Dick on his iPhone prompted Stephen Wishnevsky of Winston-Salem to write about another classic of American literature, Huckleberry Finn, and to confess to an act of literary heresy. 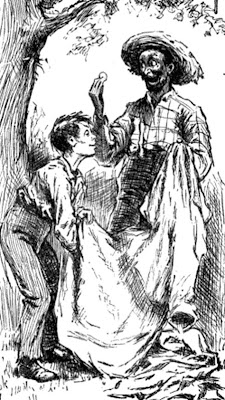 In the same thread as Paul O’Connor’s review of “Moby-Dick; or, The Whale,” by Herman Melville, I have been tempted to write a few words about “The Great American Novell” Huckleberry Finn. O’Connor said, “While youth is wasted on the young, so is a good liberal arts education.” There was a suggestion that classic books are likewise wasted on people whose only experience is of school. I must agree.

The common criticism of Huck Finn is that it is flawed. Here is a take from the dean of science-fiction writers, Fredrik Pohl

.”But then at the last, when eighty per cent of the book has been a marvel, Tom Sawyer reappears on the Phelps plantation and concocts a lunatic humbug scheme to ‘free’ the slave Jim, who, as Tom well knows, has in fact been freed already by testament of his late owner.

There are some funny, farcical bits in that ending. There are even a few touching ones. Nevertheless. The conclusion of the novel is an affront. Twain has touched our hearts with common human reality; then he pisses it all away in ten chapters of baggy-pants burlesque in which everyone behaves like a fool. There is only one word to describe the last one-fifth of Huckleberry Finn, and that word is dumb.” http://www.thewaythefutureblogs.com/page/13/

I must disagree. The last third of the book is something I find no facile word for, not a satire, or a burlesque, but a masterfully written misdirection, an indictment of the South and of slavery, written by a master, by a man who deeply cared for the region, the African Americans, and even for the pathetic slave owners themselves. Twain knew what he was doing, and so did Tom Sawyer.

Read the description of Phelps’ farm. No plantation, but a hardscrabble enterprise with a few horses, a pack of hounds, a milk cow and a dozen slaves. Reread the “spoon-stealing” scene again. The mistress of the house is driven to distraction because one of her spoons is missing. She has but a dozen. One pewter spoon is a measurable fraction of her family’s wealth. No Tara this.

The family’s only claim to status is their slaves, who live on the same food, on the same land, all souls barefoot in the dust and mud, probably with hookworm.  Consider that the few hundred dollars they might get for Jim’s reward is a bonanza beyond belief.

Consider that of all the adult males in the book, Jim is the only one that displays any maturity. He is caring, resigned and loves Huck, because Huck is actually lower down the social ladder than a runaway black.

Tom Sawyer is that Southern romanticism personified. And as such, he is kin to Braxton Bragg and Edmond Ruffin, J.C. Calhoun, Jeff Davis and all the other romance-blinded “chivalry” who killed six hundred thousand Americans, for no real reason, except rationalizing their own precious greed and privilege.

In modern terms, psychopaths and sociopaths. Charming, freckled face Tom Sawyer a sociopath? Just like Ted Bundy. Everybody loved him, too.

Indeed. Tom knew Jim was a freeman, and withheld that knowledge so he could have the fun of creating vast and insane plots to bamboozle everybody involved. Not “lunatic.” Insane. What fun.

In Tom Sawyer, he hatches a plot to make the village think that five of their boys have drowned, so he can spring out at the funeral and cause a sensation. How wicked is that? Sociopathic is the only word applicable, even if it did not exist in 1873.

Twain was no fool. He knew what he was about, but his critics just don’t get it. I would never have recognized this theme when I was a young man; only decades of experience led me to this conclusion. That realization led me to commit heresy and write my own sequel, The Mostly True Adventures of Habakkuk Finn, available here.

Audacity? Advertisement?  Yes, and a strong lack of respect for my betters. Too bad.

This entry was posted in Classics, Commentary. Bookmark the permalink.