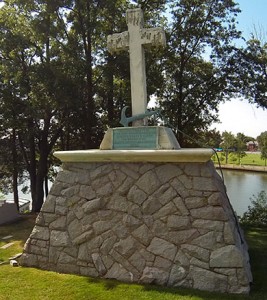 I’d seen the large monument in the cemetery at Hospital Point on the grounds of the U.S. Naval Academy in Annapolis. It’s a structure of rocks, topped by an ice-glazed cross and an anchor. I suppose I’d even read the inscription. But there are a lot of monuments on the Naval Academy grounds. Not until I learned of the terrible ordeal of the crew of the USS Jeannette through Hampton Sides’ gripping new book did I fully appreciate the rare example of courage, perseverance and the human spirit that this monument commemorates.

IN THE KINGDOM OF ICE: The Grand and Terrible Polar Voyage of the USS Jeannette. By Hampton Sides. Read by Arthur Morey. Random House Audio. 17 ½ hours, 14 CDs. $45. Also available in print from Doubleday.

The United States was finally recovering from its devastating Civil War. The Centennial Exhibition in Philadelphia in 1876 had introduced such wonders as electric lights, the telephone and the typewriter, fueling Americans’ belief that they could accomplish great things. With the American West largely having been settled, attention turned to conquering a new, unexplored frontier: the North Pole. The U.S. Navy was still small and somewhat outdated, clearly inferior to the British fleet.

And James Gordon Bennett Jr., the flamboyant and extraordinarily wealthy owner of The New York Herald, wanted a story that would boost circulation even more than had his stroke of genius in 1871, when he sent a reporter named Henry Morton Stanley to the wilds of Africa to find the famous British explorer Dr. David Livingstone. This was the heyday of newspapers, and Bennett had no qualms about creating the news.

All these factors, plus the ambitions of a young U.S. Navy officer, George Washington De Long, were at play on that day in early July 1879 when the USS Jeanette, with De Long and a crew of 32, including a Herald reporter, set sail from San Francisco amid great fanfare. They were going to find the North Pole.

The Jeannette was a Navy ship and De Long a Navy officer, but Bennett of the Herald was picking up the tab. That meant Bennett also got to call at least some of the shots.

De Long had been in the Arctic before, and the ship had been reinforced to withstand the tremendous pressure of the ice they would encounter. Egged on by Bennett, the nation was watching and waiting with high expectations.

But, as Sides’ well-documented narrative makes clear, the expedition faced tremendous challenges, some of them unnecessary. First, the fundamental premise on which De Long operated was wrong. There were various theories about what the North Pole was like, and De Long and Bennett had chosen to trust the prominent German geographer August Petermann, who believed that once they were through a rim of ice where rivers emptying into the ocean had frozen, the explorers would find an open, warm polar sea. If global warming predictions are correct, that open polar sea may became a reality later in this century, but it was a myth in 1879.

And, as De Long discovered much later, many of Petermann’s charts and maps of the Siberian coast were woefully inaccurate. Petermann had committed suicide the autumn before the Jeannette set sail, so he never knew the repercussions of his mistaken ideas. Maybe his death was an omen.

Bennett insisted that the Jeannette spend some time pursuing what he thought might be a side story before the ship actually headed through the Bering Strait and northward. Given the brevity of the arctic summer, that delay was costly.

In any event, the Jeannette became trapped in pack ice north of the Bering Sea but way short of the pole. And there she stayed for two years, immobilized but moving along with the giant, shifiting pack of ice. Those who survived would look back on those two years stuck in the ice as the good times of the expedition. They had brought a huge store of food and other supplies – even cases of Budweiser beer. And they could walk out onto the ice to hunt for game.

There were some failures. The arc lights De Long had bought from Thomas Edison to help dispel the interminable darkness of polar winters did not work. Nor did the telephones supplied by Bell that were to have linked those who ventured from the ship with those still on board.

Eventually, in the summer of 1881, the Jeannette finally broke free and floated in the water.  But any celebration did not last long, because before long the ship was destroyed by the pressure of the ice floes surrounding it. Those on board had to abandon the sinking ship in favor of three small, open boats.

And there begins the horrifying part of the story. With winter bearing down, the men set out to find Siberia, where they hoped they could get help. Battling fog, cold and dwindling supplies, they sometimes dragged their boats, sometimes rode them across relatively open stretches. And then in a fierce storm, the three boats became separated. One boat vanished forever. One, under the command of George Melville, the Jeannette’s engineer, made it to Siberia. Melville and his men suffered considerably but did find helpful natives. De Long and those on the third boat found that rather than anything like Petermann’s charts, the delta of the Lena River was a bewildering maze that would soon freeze. And the natives who spent summers in the area had already retreated to safer areas.  So had most of the wildlife that might have become food.

De Long’s party left the boat and wandered across the harsh, barren land as winter began to set in. Because De Long, the ship’s doctor and others kept good records and journals, Sides is able to tell us about their increasingly desperate ordeal in gruesome detail. When a team led by Melville eventually found their bodies months later, it appeared that De Long’s last conscious act had been to fling his journal away from the fire so that the information he had painstakingly written would be preserved. His raised arm was frozen in the act of throwing.

I listened to the audio recording of this book, ably read by Arthur Morey. Sometimes, when listening to a complex historical account, I think that I might have enjoyed it more had I read it in print. That is not the case with this book, because I am confident that I would not have kept reading the print version as it described more and more about frostbite, amputations and starvation. But the story is fascinating and worthwhile, and I’m glad that Morey’s presentation kept me going through the grimmest parts.

This is a well-researched, well-written historical account, and a true-adventure tale of valiant explorers. Sides also thoroughly grounds the expedition in its context, the Gilded Age, telling readers much about the outrageous exploits of James Gordon Bennett and about American society in general. He also ably describes the beauties as well as the terrors of the arctic, including much information about the natives in Alaska and Siberia and how the coming of “civilization” affected them.

It’s also a very human story. We get to know and care for De Long and his wife, Emma, who wrote him many letters he would never see, and who later worked to make sure that his detailed accounts of the expedition were made public. One of the most remarkable things about De Long is the way that this young Naval Academy graduate and Navy officer maintained dignity, discipline and purpose right up until his terrible death. The Jeannette Monument deserves its place of honor.

2 Responses to Grand and terrible