Adventures with the Amazons

Often when reviewing an audio book, I consider whether I would have enjoyed the book more or less had I read the print version. Some books are so good I savor them both ways.

Although I was entertained, for the most part, by the audio presentation of Anne Fortier’s The Sisterhood, I doubt that I would have made it through the book in print. This is a lively story that could be a good source of amusement on a long car trip, for example. I happily listened to it over several days of commuting to and from my teaching job at a university two hours away. But because it’s long and has some annoying weaknesses, I doubt I would have finished if I’d been turning pages. 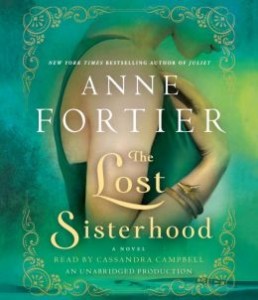 The Lost Sisterhood is an action-adventure romance dealing with myths and treasure, sort of like an Indiana Jones tale with a female heroine who gets embroiled in a (rather predictable) love story. It also has a secret language and ties to ancient history, something on the order of a Dan Brown novel.

It’s an ambitious book, alternating the stories of Myrina, the first queen of the Amazons, with that of Diana Morgan, a brilliant modern-day young Oxford academic who is obsessed with the legend (or is it truth?)  of the Amazons. Diana had a mysterious grandmother who thought she was an Amazon – and who may or may not have been mentally ill.

Accepting what’s supposed to be a lucrative one-week job from a stranger who approaches her in the street, Diana sets off on an extended adventure across several countries on two continents. Along the way, she encounters all sorts of danger and unexpected twists and turns. Often, she doesn’t know ally from enemy.

The roughly parallel story of Myrina begins in Northern Africa and eventually becomes entwined with the Trojan War. The treasure the Amazons (if they still exist) may or may not have likely came from the doomed city of Troy.

Although there were times when I thought that Myrina and her sisterhood seemed awfully 21st-centuryish for Bronze Age women, I generally thought their storyline worked better than the one set in the present day. That’s largely because I found Diana Morgan to be hardly credible, and if credible, not very appealing. For an Oxford professor who is supposed to be highly intelligent (we even learn her IQ), she makes a lot of bad decisions. She seems more foolhardy than brave, more mule-headed than determined. She has little or no sense of responsibility.  She gets herself into difficult, even dangerous situations, and then deals with them by begging “Please…” a lot.

Cassandra Campbell does her usual good job of reading the book. Don’t get me wrong; this novel does have its attractions. The story of the Amazons, and of Paris, Helen and the other leading figures in the Trojan War, is fascinating. The adventure is compelling at times. In spite of my impatience with Diana, I did keep listening – and sometimes found myself disappointed when I reached my destination and had to wait to hear what happened next.