Sometimes, when she’s not writing historical novels or modeling Tudor costumes at book events, Anne Barnhill amuses herself by reading a good thriller. 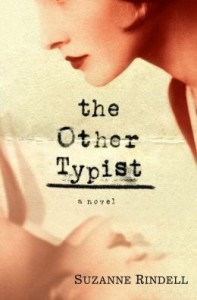 In her debut novel, Suzanne Rindell dishes up a delicious psychological thriller, a cold serving of elegant writing and bizarre twists reminiscent of Henry James’ The Turn of the Screw or even Fight Club by Chuck Palahniuk.

Set in 1923 in New York City, The Other Typist sizzles with speakeasies, petty crime and Odalie, the new typist hired by the NYC police department to take down confessions of various criminals.  Rose, the young woman who narrates the story, is also a typist at the police department, a dour gal with plain looks and keen powers of observation.  Rose, lonely at heart, comes under the spell of the charismatic Odalie and happily follows Odalie into all kinds of new and sketchy situations.

Freed from her strict morality, compliments of a childhood raised in an orphanage run by nuns, Rose begins a slow descent into an amoral world.  Eventually, she even decides to administer justice as she types a false confession, convicting a man she believes is a serial killer.  She begins to accompany Odalie to one speakeasy after another, drinking absinthe and champagne.  Rose’s feelings for Odalie brim with sexuality, though Rose cannot see these feelings for what they are.  Rose is deluded about a lot of things, most of all, Odalie herself.

This fine novel is riveting as the very nature of reality is tested.  What is real and what is fabricated weave together so tightly that even after finishing the novel, the reader is left with more questions than answers.  An excellent read!

This entry was posted in Thriller/Suspense and tagged Suzanne Rindell, The Other Typist, thrillers. Bookmark the permalink.