One summer, many stories

Do interesting vignettes from a common era make for a compelling read? Paul O’Connor, journalist, professor, gentleman and history buff, among other distinctions, takes a look at Bill Bryson’s latest book. 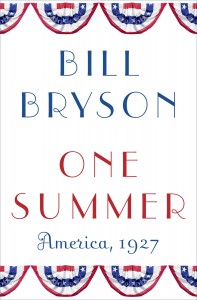 In the span of one summer, give or take a few months, Charles Lindbergh flew solo over the Atlantic, Massachusetts executed Sacco and Vanzetti, the New York Yankees had one of the greatest seasons in baseball history with Babe Ruth hitting 60 home runs, the Mississippi River flooded biblically, the nature of Broadway musicals and Hollywood movies changed for the good, and four men met on Long Island to – unintentionally – set in motion the economic forces that led to the Great Depression.

That summer was 1927, and author Bill Bryson has collected what is essentially an entertaining anthology of historical vignettes, attempting to weave them into a somewhat coherent history in One Summer: America, 1927.

Whether he achieved such a thing will be a matter for each reader to decide, but this one says he didn’t. This is a book full of stories, all happening at relatively the same time, some coincidentally, some not. But Bryson gives us only a shallow understanding of how they were related to one another or how they all sprang from some element of our culture.

A few themes are in play. In the 1920s, Americans loved the big event, thus the fascination with the big prize fights of the day, with a single flier traversing an ocean or with a revolutionary musical that followed a story line – previously, music and story were unrelated. There was also Prohibition, which shaped much of the popular culture; and both American xenophobia and anti-intellectualism played into any number of stories that the modern non-Tea Party American would now consider a stain on our national reputation.

So, what is the problem if cohesion is lacking, if the author bumps us from one story to another?

The book becomes too easy to put down.

Only Lindbergh is a constant presence, appearing in the early pages, at intervals throughout the book and into the late pages. Interspersed are the stories of everyone and everything else, and when each of those stories concludes at a chapter’s end, the reader has the natural temptation to turn on the tube.

That’s why it took me six weeks to read a book I should have finished in three nights.

But it is not to say that this isn’t a fun read, because the book at times is hilarious and insightful.

Bryson, as those who have read his other books know, is a very funny guy, and he brings a very amusing cynicism to his copy. For example, there’s this on Chicago Mayor Bill Thompson:

“Thompson was an oaf from toe to toe and ear to ear, but his supporters never held that against him. ‘The worst you could say about Bill is that he’s stupid,’ remarked one cheerfully.”

His funniest and cruelest writing, however, may be directed at President Calvin Coolidge. Bryson is of the traditional school of history regarding Coolidge, considering him a do-nothing, bland and rather talentless chief executive. (A new Coolidge biography in my bookstore appears, by its jacket cover, to disagree with this assessment, but I haven’t read it yet.)

He’s also exceptional at finding the long overlooked or forgotten story. My favorite: When Sacco and Vanzetti went to the electric chair, Robert G. Elliott flipped the switch. Elliott also executed Ruth Snyder and Judd Gray, the lovers who botched the staged murder of Mrs. Snyder’s husband and became the biggest tabloid news story of the era, and Bruno Hauptmann, the man convicted of kidnapping and killing the Lindbergh baby. Elliott was a “ubiquitous” executioner, Bryson says.

No doubt, One Summer was under a few Christmas trees this season. It’s a fun book to read between NFL playoff games.