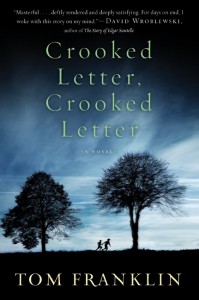 Here’s my first review for Briar Patch Books. It’s a fitting topic for the debut post. While my fellow reviewers and I will tackle a variety of books, I have a special interest in Southern fiction. Tom Franklin’s book is one of the best new Southern novels I’ve read in a long time.

I expect many of us who grew up in the South didn’t need the help. I can remember my father teaching me that saying before I started to school, and I’ve never had a bit of trouble spelling Mississippi.

Understanding Mississippi, or the complex, troubled racial history of most of the South, however, is a different matter. There’s more that’s crooked, convoluted, twisted and sometimes incomprehensible in the collective Southern soul than just the repeated letters of a name borrowed from the American Indians.

Franklin’s wise, thought-provoking novel makes a fine contribution to the continuing task of trying to understand Southern-ness in all its intricacies.

But don’t feel that reading it is some sort of chore or lesson. The book above all is a highly entertaining, engrossing story. Here’s the first sentence: “The Rutherford girl had been missing for eight days when Larry Ott returned home and found a monster waiting in his house.” After that, who would not be compelled to keep reading? And subsequent pages don’t make it any easier to put the novel down.

Larry Ott, we learn, was never a boy who fit in. He was always a little different, what old-time Southerners might call “curious.” Though he enjoyed his own books and stories, school was a trial for him. But there was a brief time back in the late 1970s when Larry had a friend. The problem was, that friend was a black boy, an outstanding athlete named Silas “32” Jones. Even though the schools were nominally integrated, blacks and whites were not supposed to be close.

Whatever chance Larry Ott might have had for a normal life died the night he finally had a date. He took a high-school girl to a drive-in movie, and the girl was never seen again. Larry was not charged, largely because the girl’s body was never found. In the way of a small town, Larry Ott became “Scary Larry.”

More than 20 years later, Larry lives a lonely existence, going to work every day at the garage he inherited from his father, waiting for customers who never come. As he says at one point, the only person he really knows is his mother, and because she’s in a nursing home with dementia, she doesn’t know him.

His one-time friend Silas has moved back home and taken a job as a constable. But “32” doesn’t seem eager to renew his ties with Larry.

When another girl — the Rutherford girl — goes missing, just about everyone believes that Larry killed her, and that the latest crime proves the widely held belief that he killed the girl who disappeared two decades before.

Then the “monster” shoots Larry. Or did Larry, overwhelmed by guilt, attempt suicide?  As Larry lies in the hospital, battling for his life and then for his memory, Silas finds himself struggling with his own demons.

Eventually, it becomes clear that the two crimes involving missing girls are related, but not necessarily in the way that most people assume. To solve the mysteries, Larry and Silas must figure out what happened to them and their friendship all those years ago.

Franklin’s writing is just right. He gives us almost poetic descriptions of the Southern landscape —  “… the bobwire fence, the sodden green field beyond stabbed with thistle, goldenrod, blue salvia, and honeysuckle at the far edges, where the woods began…  ” — without overdoing the kudzu and skinny stray dogs. He has a good ear for contemporary Southern language, but he doesn’t overindulge in dialect.

And he offers some moral insights into that Southern soul without becoming preachy. If you like a gripping, well-told story, read this book. When you’ve finished, you’ll think about it, without even trying.

This entry was posted in Mysteries, Southern Fiction. Bookmark the permalink.