Paul O’Connor, when he’s not commenting on the shenanigans in our state government or teaching aspiring journalists, is a devoted student of American history. Here he takes a look at a new book about Franklin D. Roosevelt and World War II. 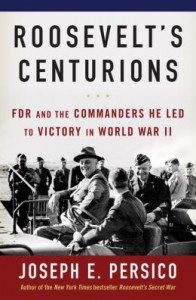 Near the end of his latest book on Franklin D. Roosevelt, Joseph E. Persico describes the 32nd president as a grand chess master, in the sense that he ran World War II with a clear view of its many facets, from strategy to logistics to personnel and, most important, to politics, both internal and external

But as you read or listen to Roosevelt’s Centurions, you might wonder just who it is against that Persico envisions FDR playing a chess game.

Certainly it is not Hitler or Hirohito; they’re mentioned relatively few times, considering the topic of the book. More likely, the opponents would be Winston Churchill and Josef Stalin, maybe with an occasional match against Chiang Kai-shek.

The U.S., Great Britain and the Soviet Union did not form a trusting alliance. Roosevelt and Churchill feared that Stalin would make a separate peace with Hitler in 1942 and 1943. Up until the spring of 1945, Stalin feared that the Western allies were up to the same thing.

Each also had its own aims.

Churchill pursued his military strategy seeking to preserve the British Empire, mostly by keeping open the Mediterranean Sea and the Suez Canal channels to India. FDR wanted WWII to signal the end of colonialism and had no interest in spending American lives and treasure to preserve what he considered to be British fascism in India. Stalin wanted a cordon of compliant states surrounding him, and he wanted reparations from Germany to replace all that had been destroyed when the Nazis invaded his country.

Churchill had absurd visions of defeating Germany by attacking her from the south, through Italy, the Balkans and eventually Austria. At the same time, he saw this strategy as a way of blocking the Soviet thrust into Eastern Europe, a thrust that he correctly saw as leading to the eventual creation of vassal states. FDR was more concerned with defeating Germany, and then Japan, as quickly as possible and then turning to the creation of a United Nations.

While one might suspect from the title that this book is about, first and foremost, FDR’s workings with his own American commanders – and there certainly is a great deal of valuable information and insight provided here about those relationships – it is FDR’s dealings with his two counterparts that drive this story forward.

Most of the times, at least.

If there is one criticism to level at this book, it is of focus. Persico weaves together so many stories and themes that he leaves us with neither a comprehensive survey of the war nor a focused, in-depth exploration of one of its many elements.

Nonetheless, this is a terrific read (or listen). Persico does provide much good information about each of the American centurions, and his focus on FDR as commander-in-chief is the best I’ve encountered during a lifetime of reading WWII histories.

The narration by Dan Woren, as one would expect of the seasoned audio artist and actor, is excellent, too, although he does amuse with the occasional odd pronunciation of certain words, such as ignominy.