All you can read: delicious and satisfying

Want to laugh, cry, shake your head and smile? Need a reminder about the good things in life, the things that help us rise above the setbacks? Then Edward Kelsey Moore’s debut novel is a book for you. 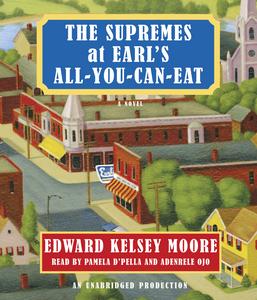 This novel reminds me of the best works of Fannie Flagg, and, believe, me, I mean that as a ringing endorsement. I think Fannie Flagg does a marvelous job of writing about real people, deftly combining laugh-out-loud humor with wisdom, honestly writing about the joys and the heartaches of life. Sometimes, she tosses in a touch of magic.

This story of three girls who were dubbed “the Supremes” because it was the 1960s and they were young, black and nearly inseparable, is squarely in that tradition. It is an often funny, sometimes poignant, always genuine look at life’s inevitable blend of comedy and tragedy.

I’ll admit that I was a bit leery at first. The book is billed as the story of three women who were high-school best friends as they make their way over four decades of marriage, children and the business of living. There are so many novels about groups of women friends that these books tend to take on a certain sameness.

Then there’s the fact that this book about women is written by a man – Edward Kelsey Moore, a first-time novelist whose “real” job has been as a cellist in Chicago. What, I thought, gives this man the idea that he can write credibly about the hopes and dreams of women, that he can understand and convey their challenges and triumphs?

It didn’t take many minutes of listening to the audio presentation of the book to realize my doubts were unfounded. Moore has written a brief note explaining that the novel grew out of a childhood spent “eavesdropping” on the adult women in his family, and is intended to celebrate “smart, funny, and strong women.” He obviously listened well.

And although his book is reminiscent in a good way of Fannie Flagg’s stories, it’s thoroughly original. Clarice, Barbara Jean and especially Odette are vibrant, achingly human and definitely their own women. And then there are Odette’s mother, Dora, and her pal Eleanor Roosevelt, but I’ll let you discover get acquainted with them on your own. Just when you fear that this book is going to lapse into the predictable, Moore throws you a surprise.

Clarice, who has been in the public eye since she was the first black baby born in University Hospital, believes that appearances are important and being prim and proper is a high virtue, perhaps the highest. She maintains her standards despite her philandering husband’s misadventures.

Beautiful Barbara Jean grew up in rough circumstances until teenage Odette, with the nervous assistance of Clarice, took her under her ample wing. Now Barbara Jean’s past threatens to destroy the life she’s made for herself.

Odette, born in a sycamore tree, is tough, determined and known to be fearless. She’s built broad and strong, just like her mother. But life hands her a terrifying challenge that even she might not be able to conquer.

The story spins out in chapters that move back and forth in time. They also alternate between Odette’s first-person accounts and a third-person narrative, a device that offers multiple insights and deeper understanding. In the audio presentation, two readers with noticeably different voices underscore the shifting points-of-view.

Earl’s All-You-Can-Eat is a restaurant and gathering place that’s the heart of the black community in Plainview, a Southern Indiana town. That’s where the Supremes hung out when they were teenagers, and it’s where they go for Sunday dinner and gossip as adults. Big Earl, the founder, was a wise and compassionate man.

You can’t go wrong with this book whether you read the print version or let these two skilled women read it to you.  I can attest, though, that if you listen to the audio presentation, you’ll come to believe you’re sitting at a table at Earl’s, sharing time and stories with good people. You can’t quite taste the ribs, wings and other delights on the all-you-can-eat buffet, but you sure can savor the friendship.