This one’s a reach for Reacher

Bob Moyer has returned from points north just in time to see snow here in North Carolina – and to tell us about one of the books he read when he was traveling. 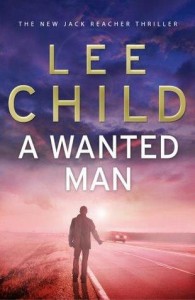 A bevy of federal agencies shows up to view a body at the out-of-the way (read: Nebraska) pumping station.  The murder was definitely a professional hit; an eyewitness saw three men go into the station, and only two, wearing suits and ties, come out. The sheriff did not hesitate to put out an order for roadblocks.

A few miles and a few pages down the road, Jack Reacher hitches a ride with two men and a woman, and steps into another slam-bang start to an adventure — a tension-packed car ride for over 100 pages with two killers and their kidnap victim.  Before long, the killers have Reacher driving the car.  Before long, he is A Wanted Man, sailing calmly through one roadblock after another, the killers’ front man.

Meanwhile, and for the time being, the FBI takes charge of the case.  As Reacher careers unwittingly eastward with the killers, Agent Julia Sorenson heads the other way from Omaha to take charge of the case.  While she looks for clues to where the killer and the killed come from, Reacher tries to figure out from conversational clues where he’s headed.  With all his senses on the alert, he soon realizes he’s driving deeper into danger with each mile; little does he know that all of his companions are not what he thinks they are, and he’s once again caught up in an international conspiracy.

Forensics also reports something (besides death) wrong with the body — some bones were sticking out. Besides providing evidence that torture was involved, the bones provide a metaphor for the book — the bones are sticking out.

A Lee Child book usually barrels along at a pace that prevents too much thought about probabilities, riding a plot that turns corners so quickly you can’t see what’s ahead. As the killers and the cops race back and forth across America’s heartland, the author does make a couple of clever turns, particularly with a couple of Homeland Security agents and the fate of an FBI agent. However, all the travel time drains suspense as they cover hundreds of miles and pages, but can’t cover up the unlikelihood of Reacher’s tagging along.

As usual, Reacher is at his best tracking down the truth, taking a phrase from one of the killers and turning it into the clue that leads to the final battle with the bad guys. Fittingly, the book concludes with him in the back seat of a car, summing up the case before he continues his trip to Virginia, thumb out. Unfortunately, he doesn’t get this reader’s usual enthusiastic thumbs up for his hard work.