What it all means, in one short novel

My husband, who was a newspaper reporter before he saw the light and became a physics teacher, is much impressed by the latest book by the author of Einstein’s Dreams. 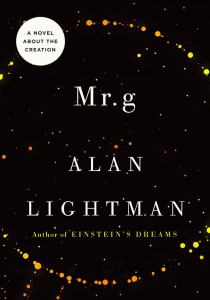 The Father of Physics is … not Isaac Newton, not Albert Einstein, not even Thales of the ancient Mediterranean Sea. God invented physics to govern his pet universe, according to Alan Lightman, a theoretical physicist and author. And then, He (Mr g) sat back to watch how it would all turn out.

Lightman, who has taught both humanities and physics at MIT and Harvard University, has creatively used math and modern physics to get inside God’s head and recollect how He started it all (existence) and examine all the problems that accompany existence. His account begins innocently with Mr g, his aunt and uncle leading bucolic nonexistence in the Void.

“Now the earth was formless and empty, darkness was over the surface of the deep, and the Spirit of God was hovering….” Genesis 1:2.

Mr g wakes from a nap in the Void and decides to create a something to relieve his boredom. His aunt (who is a bit of a nag) is horrified that g would disrupt the peaceful beauty of nothingness by inventing anything, but his uncle is more encouraging. While the three are batting about the pros and cons of doing anything at all, Mr g accidentally invents time, and there is no turning back.

As soon as he invents space (over eons of time), energy appears. He watches matter erupt from energy in his first little squiggly universe. Mr g is enjoying himself so much he keeps inventing universes, until he realizes that he has, again accidentally, invented Someone Else, a clever rival named Belhor.

What began as a whimsical historical novel becomes a point/counterpoint examination of good and evil, suffering and happiness, absolute values versus relativity, punctuated now and then with big questions about existence itself. As Mr g selects a favorite universe to observe and formulates the physical laws that will govern that body, Belhor bedevils God to stay uninvolved in the consequences of his Creation. And ignore love, agony and related issues.

While describing the evolution of the chosen universe, Lightman lets Mr g tell how life was formed and has progressed:

“As with the planets and stars, I had nothing to do with the manufacture of these (living) molecules. They formed by themselves, irresistibly following the creation of matter and the small number of principles with which the universe began.”

Then, there is the question of Mr g’s relationship with those living creatures, and of what happens to those creatures in eternity. He then begins to address the ticklish matter of the soul and what happens in The End …. And perhaps the Next Beginning.

This brilliant little “novel” turns out to be a mind-boggling and soul-searching examination of human existence, how we got here and where we may be going, all with a bit of math, a little physics and a broadside of theology and moral philosophy.