As readers of this blog know my now, I love historical fiction, especially novels set in the early 20th century. World War I and its aftermath in England have long been a particular interest of mine, partly because that conflict wrought such profound changes on the world as the British knew it. Charles Todd’s novels are outstanding examples of fiction set in this period.I was delighted when Susan Elia MacNeal began writing her Maggie Hope mysteries, which offer similarly well-researched glimpses into life in England during the next “great” war, World War II. Here’s a look at the second in that entertaining series. 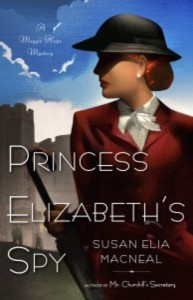 When we first met Maggie Hope, in the series’ debut novel Mr. Churchill’s Secretary, she was working as a secretary – typist, really – at No. 10 Downing Street. She grew up as an American, living with her aunt who’s a professor at Wellesley, but she’s British by birth and citizenship. She had arrived in England to sell her late grandmother’s house, but she decided to stay on when she got caught by the outbreak of war.

Maggie is determined to do what she can to help the effort to save England, although her skills as a highly educated, mathematically gifted person are often obscured by the fact that she’s female.

As this second novel opens, Maggie has joined MI-5 and is trying to complete the training necessary to be sent as an undercover agent to the continent, where she hopes to make good use of her code-breaking skills. Unfortunately, Maggie comes up short in the physical training and is offered a quite different position.

To her dismay, she is ordered to head to Windsor Castle, where the young princesses have gone for safety’s sake, and take on the position of Princess Elizabeth’s math tutor.

Though she’s sorely disappointed by this seemingly mundane assignment, Maggie soon realizes that her role is more important – and dangerous – than she ever dreamed. There are those who would undermine the British throne, and, as the heir apparent, young Elizabeth is a target.

Hardly has Maggie settled in at the castle when a murder makes it clear that all is not what it seems. With a sinister conspiracy afoot, who can be trusted?

Once again, Maggie’s shadowy family background factors into the intrigue. Having grown up thinking she had been orphaned by a tragic accident, she was shocked in the first novel to learn that her father is alive and embroiled in matters of war. Now she faces more disturbing revelations.

This book is rich with historical detail, on both the grand scale – the espionage and intelligence swirling around the war – and the personal – the personalities and quirks of figures such as Winston Churchill and the royal family (and their corgis).

The plot is suspenseful and fast-moving. Maggie is a believable, endearing character. You admire the spunk and determination with which she battles not only the sometimes shadowy enemies but also entrenched prejudice against women.

My only quibble was with the main action/fight scene, which seemed a little forced. But maybe MacNeal just needs a tad more experience writing such scenes. Judging from this novel’s end and the preview of the first chapter of Maggie’s next adventure, I’m guessing MacNeal will soon be as much a pro on that score as she is at writing about the intrigue and interactions in the hallowed halls of a besieged England.

All in all, this book is a highly entertaining tale that provides inspiring insights into Britain’s “finest hour.” I’d love to know what Queen Elizabeth (aka Lilibet) thinks about it!

2 Responses to Danger at Windsor Castle