For your listening pleasure – Stephanie Plum

I listen to audio books for a lot of reasons. Listening to someone read a book is convenient and entertaining, because I spend a lot of time in the car, driving alone.

I find that I’ll listen to serious nonfiction and other heavy-duty books that I might not tackle if I had to sit down with the print edition.

I’ll also try fiction from authors unfamiliar to me, or novels that might seem not quite to my taste, since I’m going to be driving anyway. I figure I might as well try a book rather than listen to the radio. Only occasionally has a book been so bad that I was tempted not to finish listening to it, and in at least one of those cases, I became so fascinated with how dreadful the book was that I kept on to the end out of horrified curiosity.

Many books, fiction and nonfiction, work well in the audio format.

But if I had to choose one book or series that’s absolutely the best to hear read aloud, I’d probably go for Janet Evanovich’s Stephanie Plum series, as read by Lorelei King. 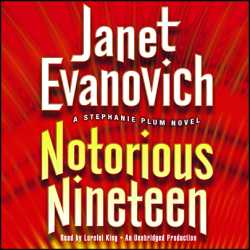 Janet Evanovich’s Stephanie Plum books are pure pleasure.  Before I tried one, when all I knew was that the heroine is a bounty hunter in New Jersey who nabs criminals who have jumped bail, I thought they’d be grim. I thought Stephanie Plum would be one of those hardboiled women characters that really seem like a man in everything but name. I thought the crimes and criminals would be depressing.

Thank goodness I was wrong. The books have more to do with comedy than crime, and Stephanie is a believable and likable young woman who just happens to prefer working for her cousin’s bail-bond business to any other job she can think of. She’s a nice girl who regularly stops by her parents’ home for a good meal and use of the laundry facilities, and who sometimes lets her grandma help her out with cases. She has a pet hamster. Throughout most of the novels, she’s been torn between Joe Morelli, a cop she’s known since high school, who just might want to marry her; and Ranger, who’s mysterious and dangerous and definitely not husband material. By No. 19, she’s decided to keep things mostly business with Ranger and be true to Morelli, but her resolve can be sorely tested.

I was not wrong, however, when I thought that a book about a bounty hunter might involve a fair amount of violence, gunshots and explosions. There’s murder and mayhem aplenty in Notorious Nineteen, but somehow it’s more amusing than appalling.

This time out, Stephanie, low on cash, is hunting for Geoffrey Cubbin. He’s on trial for embezzling millions from an assisted-living facility when he vanishes from the hospital after an emergency appendectomy.  Finding Cubbin will go a long way toward getting Stephanie’s finances in order. But how did he disappear without a trace?

Meanwhile, she pursues other cases as well, with the usual hilarious subplots, and random explosions and other accidents. Trouble has a way of finding Stephanie. Things get even more interesting when Ranger hires her to help with security surrounding the wedding of a friend because both men may be in danger from someone they once served with in the Special Forces. Going undercover means Stephanie has to wear a hideous pink taffeta bridesmaid outfit, which is almost a worse fate than all the related attempts on her life.

Several elements help make these books perfect for listening. For one, the plots, though zany and somewhat complicated, are not hard to follow. I never find myself wishing for a printed copy so that I can go back and remind myself who someone is or what happened when. Beyond that, Lorelei King does a bravura job of bringing Stephanie and all her eccentric friends, co-workers and enemies to life, with a wide range of voices. I love it when Ranger calls Stephanie “Babe” in his super-sultry way, or when Lula, the former “ho’” who works with Stephanie spouts her outrageous ideas.

When you need an entertaining break, take a ride with Stephanie Plum.