Paul O’Connor takes a look at – and a listen to – the latest re-examination of Thomas Jefferson, one of our greatest presidents (or was he?).

Old Thomas Jefferson just ain’t what he used to be. 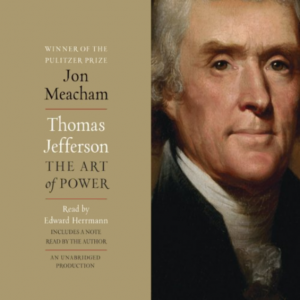 So beloved 85 years ago that Congress authorized his visage being carved into Mt. Rushmore, Jefferson over the last 15 years has been reduced to tabloid fodder over his dalliances with slaves and married women.

And now, insult of all insults, we learn that he was, in effect, called a RINO by one of his own allies in 1806 and pretty much as such by his latest biographer.

John Randolph of Roanoke called Jefferson what amounted to Republican in Name Only in March 1806, and it is probably what the Tea Party would call him if it were to read and believe Jon Meacham’s Thomas Jefferson: The Art of Power. The Republican Party of which he spoke is not the GOP of today, but the early incarnation of the current Democratic Party.

Randolph was upset that Jefferson, beloved by republicans during the Union’s 12 tense first years while federalists George Washington, John Adams and the despised Alexander Hamilton ruled, had turned into a big-government practitioner. While he might have mused of small government, Jefferson retained most of the federalist government once he moved into the presidency and then expanded it. He bought Louisiana, maybe unconstitutionally, and presided over the imposition of the hated embargo act.

Jefferson is still widely considered to have been one of America’s greatest presidents, right there in the same league as Washington, Abraham Lincoln, and the Roosevelts. And, it is to the political side of his life that readers will be most likely drawn.

Meacham says Jefferson’s personality shaped his use of power, and it is here that our first secretary of state, second vice president and third president comes off a bit like an ex-girlfriend.

Jefferson was a master of control. Things were to be done his way, down to minor details. While he did not completely avoid the stern word or raised voice to get control, he preferred manipulation, using people for his purposes.

Those manipulations drew me to this book. In his recent Washington biography, author Ron Chernow decried Jefferson, reporting that he instigated many of the personal attacks issued by the Republican press against the first president. In his book, Meacham dedicates considerable space to the conflict between Jefferson and Alexander Hamilton, between the republican “small government” ideal and Hamilton’s big government federalism. He lightly touches on Jefferson’s role in the anti-Washington press attacks, but ,more important, portrays those attacks as the kind of tactic that Jefferson so much preferred.

Jefferson hated personal confrontation. He was a gentleman of the first order, at least superficially. So, rather than attack Washington directly, he put others to work doing so. That was his modus operandi in political disputes, and it allowed him to smile graciously at someone while he also cut his throat. You might call the guy two-faced.

Maybe paranoid, too. Jefferson battled Hamilton and Washington because he feared that there was an active conspiracy afoot to re-establish a monarchy in the United States. Meacham cites many pro-monarchy writings of the time that sent Jefferson into his furors, but it is not until the end of the book that he says that he cannot ascertain whether Jefferson had a reason to fear such a development or whether Jefferson was, as other historians maintain, jumping to conclusions based on the writings of a few people. Washington certainly tried to calm Jefferson, telling him that there weren’t 10 sensible people in the country who wanted a king, but Jefferson wouldn’t believe otherwise.

The Jefferson we think of today is generally considered an advocate of small government. But Meacham makes a compelling case that he was not, that he was an opponent of monarchy, yes, but a proponent of a strong central government. Like Washington, he felt such was necessary to resist any European attempts to return us to dependent status.

As for all that stuff Jefferson wrote about the state of the yeoman farmer, Meacham says Jefferson understood that it was just the ideal and that a commercial and manufacturing world, one with vibrant cities and a strong government, was necessary.

But, as noted earlier, it’s hard to look on Jefferson today solely as a politician. He was also a lech, at least according to the version of him depicted on these CDs. He had a prolonged sexual relationship with his slave, Sally Hemings, who was the mulatto, half-sister of his dead wife, probably beginning that relationship while she was only in her mid-teens. He also aggressively pursued two married women, Betsey Walker, the wife of a close friend, and Maria Cosway, a married Italian beauty he met and courted in Paris.

Other reviewers more conversant in the subject have called this a thin biography, not very ambitious. And I would agree. But for those who haven’t read a Jefferson biography, it has value. It’s very readable, and actor Edward Herrmann does an outstanding job of presenting it on the audio book version.