In time for the holidays, a fine new Grisham thriller

Given the season, I’ll note that it’s always an occasion for Thanksgiving when a new legal thriller by John Grisham arrives.

The Racketeer, with its ingenious plot twists and breathtaking suspense, is one of John Grisham’s best legal thrillers yet. 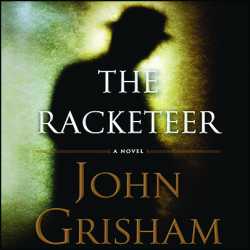 Malcolm Bannister, who narrates much of the book, was a modest success story. He’s the son of an African American retired Virginia state trooper who could not be a straighter arrow. Malcolm graduated from college and law school, and served in the Marines. He joined the only black law firm in Winchester, Va., where he wasn’t about to get rich but enjoyed a good, small-town life with his wife and young son.

All that is in the past tense. Now Malcolm is a prisoner, an inmate at a federal “camp” at Frostburg, Md., having been swept up in an overzealous federal racketeering prosecution. His only crime was being too innocent and trusting, but now he’s disgraced and in the middle of a 10-year term. His wife has divorced him and remarried. His son has another father in his life. Malcolm has been disbarred.

While in prison, he has offered his unofficial legal services to other inmates, and a few successes have earned him a reputation as nearly a miracle-worker. His fellow prisoners take him into their confidence.

Now Malcolm sees a way to use his wits and his legal skills to help himself. A federal judge and his secretary have been brutally murdered in a remote cabin by a lake.  The murderer emptied a large, state-of-the art safe, but otherwise left no clue to his identity or motive. The FBI is getting nowhere in its investigation.

But Malcolm knows who killed the judge and why, and he intends to use his knowledge to give himself another chance at life as a free man.

Fairly early in the novel, you may think, briefly, that the story of Malcolm’s redemption is all but over. Grisham, however, has a lot more in store for Malcolm and for the reader. Before long, you’ll be questioning all notions of truth and justice, and wondering who the good guys – if any – are. Malcolm’s experiences have taught him to trust no one, especially not the federal government, and it’s questionable at times whether Malcolm himself deserves trust or even sympathy.

The job of recording this book must have been tricky, especially after events require Malcolm to alter his voice. But J.D. Jackson is up to the challenge.

This is a good book, one that readers of the print edition are sure to enjoy. And if you like audiobooks, Grisham novels are ideal for listening – the powerful stories keep you fully engaged, and the characters so vivid that there’s no problem keeping them straight without being able to flip back through the pages.

The only real drawback I found was that, listening to The Racketeer while I drove my car, I found myself frequently looking into the rearview mirror to make sure I wasn’t being followed by federal agents, bad guys, or both.

This entry was posted in Audio Books, Thriller/Suspense and tagged John Grisham, legal thriller, The Racketeer. Bookmark the permalink.