A debut novel that shines

Here’s another offering by the indefatigable Anne Barnhill, who’s hard at work on her next novel of Tudor England, but kindly takes time out to review books for Briar Patch. 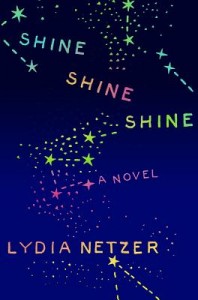 Lydia Netzer’s debut novel, Shine, Shine, Shine, is unlike any novel I’ve ever read.  If I sum up the plot, I risk eliminating the many joys of the book, not the least of which is the very human heart that beats at the center of the story.  In fact, the book is about just that – what it means to be human, to be an outsider, to be loved and to love.

Sunny and Maxon meet in childhood and form a bond that later becomes a marriage bond.  Maxon, an odd genius, works for NASA in the robotics department, where he is developing robots to colonize the moon.  Sunny, the blond, perfect wife tries to raise their son, Bubber, who is autistic, while her mother is in the hospital dying and Sunny is expecting a second child.  When Maxon becomes an astronaut on a mission to the moon, everything changes, and Sunny begins to come to terms with her own uniqueness.

Sunny has a secret; she is completely bald. All that blond hair is fake.  Matter of fact, much of the life Sunny has constructed for herself is phony. The truth is, she and Maxon are oddballs, misfits. What Sunny discovers during her own journey is that we are all outcast; we are all misfits. The trick is to learn to love those very qualities which make us, well, us.

Netzer’s novel shines with insight, freshness and wisdom.  It truly is unlike any book I’ve ever read, delightfully so.  Here is the opening paragraph:

Deep in darkness, there was a tiny light.  Inside the light, he floated in a spaceship.  It felt cold to him, floating there.  Inside his body, he felt the cold of space.  He could still look out the round windows of the rocket and see the Earth.  He could also see the moon sometimes, coming closer.  The Earth rotated slowly, relative to the things that were around it.  There was nothing he could do now, one way or the other.  He was part of a spaceship going to the moon.  He wore white paper booties instead of shoes.  He wore a jumpsuit instead of underwear.  He was only a human, of scant flesh and long bone, eyes clouded and body breakable.  He was off, launched from the Earth and floating in space.  He had been pushed, with force, away.

Obviously, this is not an ordinary, predictable novel.  It is much more like real life than that: full of twists and turns that help create us as we roll along, stumbling and bumbling our way to become that most mysterious machine of all – the human.

Netzer is a writer to watch. I can’t wait to see what she’ll do next.