Paul O’Connor is sojourning in Oregon. I’ve tried to tempt him back to North Carolina with reports of fried squash, but to no avail. At least he continues to read and review books.  I suppose he’ll return when the semester begins at Chapel Hill.

CIVILIZATION: THE WEST AND THE REST. By Niall Ferguson. The Penguin Press. 325 pages, hardcover. $35. 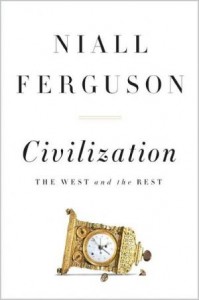 At the dawn of the 16th century, the nations that now constitute what we know as “the West” were small, powerless and poor, or, as in the case of the United States, not even a country yet.

So, what happened that flipped things for the next 500 years, that led the small, backward and constantly feuding nations of Western Europe and their offspring in the U.S., Canada and Australia to dominate the globe?

In the U.S. today, there are plenty of people who will tell you that we sit atop the globe’s pecking order because of our capitalist system, or because we are God’s children, or because we invented baseball. But Niall Ferguson, in this enlightening book of world history, searches more deeply for the answer.

The Cliff’s Notes version of his answer can be found on page 305 where he summarizes his six reasons that the West grew and the Rest stagnated:

1)    The political fragmentation among and within the countries of Western Europe led to a tradition of strong competition.

2)    The Scientific Revolution occurred in the West.

3)    The rule of law and representative government emerged in the English-speaking world.

4)    Modern medicine comes almost exclusively from the nations of the West.

5)    The consumer society, especially a desire for textiles, blossomed in the West.

6)    The people of the West were the first to combine hard work and savings.

The rise of a civilization depends on a number of developments, he notes; all six of these reasons played key roles. There is no single magic bullet, no one economic indicator or cultural behavior, that will tip a society one way or the other.

Reading this as a history is fun and enlightening. Reading it as current commentary, however, is troubling, at least if we as adults consider the world in which our children and grandchildren will reside.

When contemporary Americans consider each of his six points, they will see that we are losing our edge in each. (The author is British.)

Our centuries-long ascendancy in the sciences is quickly eroding, and the consumer society may have gone too far. Westerners do not work as hard as those in emerging cultures; certainly we don’t save and reinvest as much, and our unity is severely strained. Ferguson fears for Europe’s godlessness, and seems to admire America’s religious revival, but one criticism I’d make of this book is that he doesn’t address how our political right’s attacks on science are largely fueled by religious conservatism.

No empire lasts forever and, by revisiting the fall of Rome and several others, Ferguson makes the point that when the end comes, it comes quickly. In this book, there is much to learn and ponder for Americans of all political persuasions, if they will only read it. My suspicion, however, is that too many Americans are at the mall, buying stuff and hiding from the very global warming we deny, to find the time to do so.