No god but God: The Origins, Evolution, and Future of Islam (Updated Edition). By Reza Aslan. Random House. 338 pages. $17, paperback. 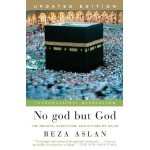 Professor Reza Aslan is an internationally acclaimed scholar of religions. This book is an updated edition of his first book, which has been called by Blackwell, the noted British seller of academic books, one of the 100 most important books of the last decade. One has only to read it to understand why. In an American culture that increasingly needs to learn more about world religions, especially Islam, this work stands out.

Too often, as a Baptist minister, I’ve seen people informed, or, more accurately, misinformed, about Islam by those writing from outside Muslim tradition.  Predictably these works focus on the differences (and in some cases) the inferiority of another religious faith. Moreover, these examinations most often attempt to describe world religions from a purely theological perspective while ignoring the values and contributions of the living people who compose the faith. In contrast with this approach Aslan demonstrates, through a masterful telling of the history of Islam, that all humankind has much in common with the followers of Islam and can be thankful for many of its contributions to human civilization.

In this updated edition of the book, Aslan concludes by showing how the various ideologies within Islam are essentially competing for the future. Those who come from Christian and Jewish worldviews who encounter Muslims in day-to-day commerce or in international relations will benefit greatly from his insight and explanations of the forces at play in Islam today. Some of the same fears of change clashing against a need to understand and embrace the modern world will be strikingly familiar to those of the other great monotheistic faiths.

Along the way we might even develop a new love and respect for Muslim neighbors. In so doing we may just understand our own religious perspectives better. No god but God is a great start toward the understanding and growth needed in our world today.