Of Ireland, and the importance of stories

Fittingly for the first day of summer – and a scorcher – here’s a warm welcome to Tom Dillon, whose first contribution to Briar Patch Books is posted here. Tom is a veteran journalist and all-around good guy. 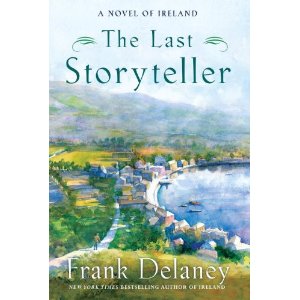 Don’t judge a book by its cover, nor by its name. I did that a couple of years ago, and that is what has brought me to my current desultory state.

I’ve followed Frank Delaney’s novels about Ireland –Ireland, Shannon and several others – ever since he started writing them. But when Venetia Kelly’s Traveling Show came out several years back, I decided it didn’t sound interesting. I thought Delaney had probably used up his muse and I would just go on to something else.

How wrong I was.

I have just finished The Last Storyteller, the third book in the trilogy that started with Venetia Kelly’s Traveling Show, and I haven’t read anything like it since the conclusion of The Lord of the Rings more than 40 years ago. Delaney spent a long time in broadcasting with the BBC before he started writing novels, and the man knows how to tell a story.

The trilogy, as you’ll know if you’ve read the first two books, follows the life of Ben McCarthy, a collector of stories for Ireland’s Folklore Commission. Through that life, we follow Irish history from the early years of the 20th century up through World War II and the “Troubles” of Northern Ireland.

(Indeed, through the stories, we follow it from the beginning of time, from the mists that surrounded the early Picts and Celts.)

We follow Ben’s marriage to the actress Venetia Kelly – and also their unplanned parting and long separation, a time when neither was completely sure where the other was, or even if the other was alive. We follow (in book two, The Matchmaker of Kenmare,) McCarthy’s long involvement both with an Irish matchmaker and with the horrors of World War II.

In this last book, McCarthy meets up, at last, with John Jacob Farrell O’Neill, world traveler and possibly the last and greatest storyteller in a land of storytellers. It is McCarthy’s relation with O’Neill that is the lifeline of this book, as well as McCarthy’s eventual salvation from what he sees as a life of misdirection.

But that’s not all. As Ben finds out, Venetia Kelly has returned to Ireland with a new husband, a brutal man and coarse but popular stage performer named Gentleman Jack. Ben schemes to get Venetia back, but he is hampered by his own involvement with gunrunning into Northern Ireland, as well as by governmental minions that threaten his career.

I can’t tell you much else about what happens here, but I can tell you that you’ll be riveted. As I said, Delaney is a wonderful storyteller. One keeps wondering how much of this is part of his story. And I can testify to the value of stories.

As their children tell us, Ben and Venetia “believed profoundly that, for the country to know where it should go, it needs to understand where it – and the world – had been.” That lesson is for more countries than just Ireland.

Only, please take a piece of advice. If these books interest you, start at the beginning, with Venetia Kelly’s Traveling Show. After originally passing it up, I happened on Ben McCarthy in the middle of his long saga, in The Matchmaker of Kenmare. I realized then that I had made a mistake and didn’t have all the back-story I needed to fully appreciate the tale.

Now, I’ve followed the tale until the end, and I’m glad I did. I wonder how much more fully I would have appreciated the saga if I’d done it right, but I have still learned many lessons in these books and, God willing, will be able to apply them to my own life.