I don’t like to watch baseball on TV, and baseball was not a favorite youth sport of either of my sons, though each tried it at least briefly.  But oh, how I love to go to a Major League Baseball game in summer. My favorite team is the Baltimore Orioles, because my husband and I lived in Baltimore for a few years way back when the O’s were good, and more recently we took in a number of games at Camden Yards with our younger son, who spent four years at the Naval Academy in nearby Annapolis. (I’m tempted to say something about the good start the Orioles have made this year, but that might jinx them, and they always break our hearts.)

John Grisham, it turns out, loves baseball too. He told an interviewer on National Public Radio recently that he played baseball in high school and dreamed of making it to the pros.

Grisham never lived out that dream, but, of course, he’s been phenomenally successful as a writer of legal thrillers. And with that success, fortunately for readers, comes the ability to write some books that are close to his heart, books that might not have found a publisher if written by someone without an established reputation. This baseball season, he offers us Calico Joe, a short novel involving professional baseball players.

Like Bleachers, his 2003 novel about the relationship between a high school football coach and his players, Calico Joe is about more than the sports. Both books show the human side of sports figures. Both make it clear that there are moral issues that transcend winning and losing in games, and both emphasize the importance of forgiveness and redemption. And like Bleachers, this one’s well worth the read – or the listen. 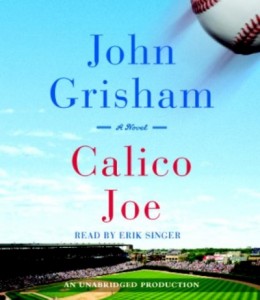 This is a relatively short and deceptively simple novel, especially if you’re used to John Grisham’s legal thrillers.

It’s a captivating, ultimately uplifting story that readers can enjoy even if they have only a passing understanding of baseball.

The story is told by Paul Tracey, the son of a former major-league pitcher. When Paul was a kid, he lived and breathed baseball, even though his dad, Warren Tracey, was anything but a model husband, father or even baseball player.

In the summer of 1973, the baseball world was rocked by a young phenomenon, Calico Joe, a kid from Castle Rock, Ark. who blazed onto the scene, sending records toppling. He was a great homerun hitter, a great all-around player and a genuinely good person. Paul Tracey worshiped him.

And then came the day when Calico Joe’s team, the Chicago Cubs, came to New York, and Paul’s dad was the starting pitcher for the Mets. Paul knew his dad well enough to have a terrible feeling when Calico Joe came to the plate for his second at-bat, after having hit a homerun the first time up. What happened when his father let loose a fastball was worse even than he could have imagined. That pitch changed the course of several lives, including Paul’s.

While the reader does not necessarily need expertise, Grisham obviously knows his baseball, including the “code” that helps determine when a pitcher teaches a batter a lesson by throwing at him.

But life is not a game, and little boys grow up. This book is told from the Paul’s perspective years later, when he has a family of his own, and his mostly estranged father is dying of cancer.

How does a boy – or the man he becomes – deal with a terrible conflict involving his father and his hero? Is there any atonement, any redemption for someone who has done a terrible deed? Is it worth the effort to try to make things right, when there really is no way to do so? Are there alternatives to bitterness and revenge?

Erik Singer’s excellent reading makes the story even more gripping – first the drama grabs you, and then the emotions. I enjoyed listening to this book almost as much as I would enjoy listening to a thrilling World Series game in which my beloved team, the Baltimore Orioles, won it all. Fortunately, I didn’t have to wait for the pleasure of listening to Calico Joe.