Much more than a baseball story

Paul O’Connor has strong opinions, and one of them is that he loves to hate the New York Yankees. As a Notre Dame grad, he also has some, shall we say, feelings against the University of Michigan. But he managed to put his prejudices aside to review a new audio version of a memoir by a remarkable baseball player who pitched for Michigan and the Yankees. 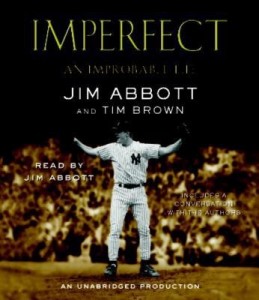 In spring 1970, my freshman year at Notre Dame, our inter-hall softball team played some scholarship athletes from across the quad, and we did so with a one-handed left fielder.

A defensive back for the Irish, who was fast enough to be close when USC’s Lynn Swann scored touchdowns against him, noted our fellow’s awkward glove-transfer routine during warm-ups, and several innings later tried to run from first to third on a ground single to left, generally a risky move.

The left fielder, a guy named Duck, charged the ball, fluidly shifted it from glove to hand and fired a one-hop strike to third that caught the jock by 10 feet. Then, in his best premonition of the Tiger Woods fist pump, he let the runner know he’d been set up in the pre-game fumbling.

Years later, when one-handed Jim Abbott, who was born without a right hand, came on the scene, first as a pitcher for the USA Baseball, then in the majors, I couldn’t help but root for him. Much like Duck, who remains one of my best friends, Abbott refused to allow his handicap to stop him, choosing instead to compete with fire and earn his spot on the field.

If you are a baseball fan, or if you just love a great human story, and you have nine hours to burn in the car, I suggest that you take Jim Abbott along. On seven CDs, he reads his own memoir – yes, I too was surprised to learn that a University of Michigan grad could read – and he will entertain and enlighten you.

Although we know of Abbott through baseball, and he spends much time talking about the game on these CDs, this is not a story about baseball. It is about a little boy facing a challenge, how he accepted it, mastered it and then, most generously, shared his success with others with similar disabilities.

There are times when he will make you cry. Disc 5 is especially poignant; he relates the stories of parents and children who come to the ballpark to visit him. Other parts will depress you.

And Abbott takes the fun out of hating the Yankees by relating how supportive his Bronx teammates were through triumph and despair.

(Thank goodness he tells us that the late George Steinbrenner, owner of the Yankees, publicly pressured him to stop helping disabled kids and focus more on his pitching. Read that and you can go back to hating the bastards.)

The book will remind us that, no matter how much professional athletes earn, they are people, too, and that they face the same pressures of failure and success as the rest of us – just with more money, if they last long enough in the majors.

There are times, especially in the late chapters, when I wanted to tell Abbott to stop being so introspective and reflective. He droned on a bit, getting very philosophical, sounding like an inspirational speaker with 30 minutes of material but 45 minutes to fill on his contract. He could have used some further editing there, but that’s a minor annoyance. Overall, this is a terrific listen made especially so by his narration.

On a long drive to and from Atlanta, I truly enjoyed Jim’s company — especially in a late chapter when he returns to New York and beats the Yankees while pitching for the White Sox.