Think you know all about our founders? Think again

Paul O’Connor, who, like me, has been on spring break from the rigors of teaching journalism at the University of North Carolina at Chapel Hill, has found time to review a book that’s been out a few years but is new to him.

When I was the book-page editor at a newspaper, we did not review books that weren’t recently published. Now the freedom of the blog allows us to call attention to books even if they are a few years (or a lot of years) old. After all, if we missed it, you might have too. And if we think it’s worth reading, you might agree.

THE ISLAND AT THE CENTER OF THE WORLD. By Russell Shorto. Vintage Books.  324 pages. $16, paperback. 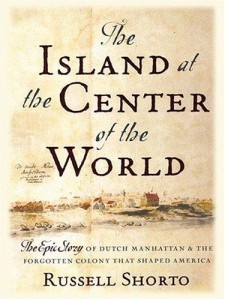 Every once in awhile, I happen across a history book that exposes how very little I knew about a subject and the extent to which that very little was wrong. The Island at the Center of the World is just such a book.

We’ve all heard the story about the Dutch purchase of Manhattan for $24 worth of trinkets, of the establishment and short life of the colony of New Amsterdam, of its peg-legged autocrat, Peter Stuyvesant – and that’s probably it. In an American history regime heavily influenced by the British version of events, little else is known about the pre-British days of the world’s most important city.

In his 2004 book, Russell Shorto pieced together a fascinating, entertaining and page-turning history of the colony’s half century before the British. It can change how we think about our history and our heritage.

The story is not as simple as we’ve been told. First, the $24 in trinkets wasn’t what we think it was. For 60 Dutch guilders worth of wares, the Dutch got the right to live on Manhattan, more like a lease. They were expected to enter into a mutual defense pact with the natives who owned the land, and those natives retained full rights to move around on the island, mingling with the settlers.

Stuyvesant may have been the colony’s official leader – the last of a string of such men sent to the colony by the Dutch West Indies Company and the first to be competent – but he was not the leader of the settlers. That title most likely – had it been an official title – would have fallen on one Adriaen van der Donck, a jurist. Van der Donck is, as Shorto notes, a forgotten character in American history, but an extremely important one.

For years, van der Donck and Stuyvesant battled over the direction of the colony. Stuyvesant is the appointed chief of the company, seeing Manhattan as a company outpost where he rules autocratically because he’s the “boss,”,a word that we derive from the Dutch. Van der Donck pushes to establish a true Dutch colony, one where the residents enjoy all of the rights and privileges of Dutch citizens and who do not answer to the company.

In their battle, we see the beginnings of many American attitudes about democratic rule and the rights of free citizens. And, while Stuyvesant technically wins the head-to-head battle, it is the philosophy of van der Donck that prevails in the end.

The story has such importance today because the colony of New Amsterdam was such an anomaly for its times. It was a truly multicultural, multiethnic town where residents were allowed to worship as they pleased. Not only did the Dutch intermingle with the natives; they also accepted settlers and traders from around the world. Such tolerance is a historical peculiarity of the Dutch, and New Amsterdam mirrored the Dutch capital of Amsterdam in that regard. It is the story of this multicultural, liberal, open society that will most strike Americans as familiar. It is who we are today, a characteristic we often assume that we inherited from the British.

But Shorto goes to lengths to remind us that the British colonies of the day were not tolerant societies. The Pilgrim and Puritan colonies of New England did not provide for religious freedom or tolerance – quite the opposite, they executed those who did not abide by their narrow interpretation of God’s will.

Today, as one small sliver of our electorate claims the exclusive heritage of the Founding Fathers as the basis for their vision of America, it is important to remember that there were many founders of this country, and they weren’t all British, white and intolerant. This book tells us one part of the history of our diverse founding, and it can change how we think about our entire history as a nation.