Annapolis and beyond – a mystery

I’ve stayed on the Naval Academy parents’ e-mail list-serve even though my son graduated in 2010. I stay because I hope that occasionally I can help some parent of a current midshipman, plus I enjoy reliving (some of) the memories. My unwillingness to let go paid off recently when another parent gave a heads-up about a new novel written by an academy alumna, with lots of action set at the academy.

Along with the review copy of the book I promptly requested came the information that the editor of the book was one of two co-founders of the publishing house that produced it, FUZE Publishing. And that editor, Molly Tinsley, taught English at the academy for 20 years and is its first professor emerita. She and her partner, Karetta Hubbard, say that they are publishing “strong manuscripts … that had slipped through the cracks of the large New York publishing houses.”

Judging from Black Wings, they are right about the “strong manuscripts” part. This is an outstanding novel. I’m glad FUZE publishing made it available. It deserves an audience much wider than just those who have ties to the Naval Academy. 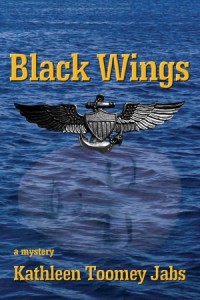 On paper, Lt. Bridget Donovan looks like an unqualified success. She graduated from the U.S. Naval Academy three years earlier, in 1990, when women had to overcome many obstacles to be accepted as midshipmen and as naval officers. She secured a rare position in public affairs. She’s doing well in her military career.

But beneath the neatly uniformed surface of Bridget’s life, there are conflicts and doubts, just as there were conflicts and doubts during her years at Annapolis. She knows well that things are not always what they seem, and that nothing is as simple and clear-cut as the military might like it to be.

Bridget is devastated when news comes that Audrey Richards, her roommate for all four years at Annapolis, has been killed in a crash while attempting to take off from an aircraft carrier. Bridget is even more distraught than she might normally have been, because she and Audrey have been estranged since they had a bitter confrontation a year earlier.

Audrey’s death is a public-relations nightmare for the Navy and especially for women who want to be pilots. All sorts of questions arise about the fitness of women and whether women pilots are held to lower standards.

Bridget soon discovers information about Audrey’s days on the carrier and in flight school that raises an even more troubling question in her mind: Was Audrey’s crash really an accident? The way the Navy is handling the incident makes her even more suspicious, as does the interest of a determined reporter.

Bridget suspects that Audrey may have suffered lingering consequences from an incident that involved an honor trial during their firstie (senior) year at the academy. That’s when she and Audrey first encountered the ominous aviators’ wings painted black.

This novel is a first-rate mystery/thriller that will keep you nervously turning pages. It’s also much more than that, as it raises important questions about honor, justice, loyalty, right and wrong, and the proper role of all these concepts in the modern military. What happens when loyalty to an individual “shipmate” appears to conflict with loyalty and obedience to the Navy? What happens when truth and orders seem to collide?

Kathleen Toomey Jabs, a 1988 Naval Academy graduate who served six years active duty, obviously knows her subject. She uses her insider’s knowledge with a deft touch, making her story alive and authentic without burdening the reader with irrelevant facts. She reminds us that the strength of the military and of honorable institutions such as the academy rests upon individual, fallible human beings.  Like all good fiction, this book is valuable when read, and then when remembered.