Elizabeth George is one of a handful of women whom, as I’ve said more than once, I’d like to BE. She’s an American who’s made a grand success of writing British police/suspense novels. That means she gets to spend lots of time in England doing research and write it off as a business expense.

As if that weren’t reason enough to envy her, she’s an excellent writer. Inspector Tommy Lynley and his friends and associates are such real characters that readers feel that they know them.  Her prose is refined, precise and flowing. Her plots are intricate, reflecting her deep understanding of the complexities of life. Even British reviewers say this American portrays the Brits convincingly.

Back to the part about her characters seeming real: They are so real that longtime readers develop strong likes and dislikes for the people in Lynley’s life. Those feelings may be responsible for some of the controversy over the most recent novels in the series, this new one included.

This is the first time I’ve listened to rather than read an Elizabeth George novel.  And that new experience, in all fairness, may have favorably colored my reaction to the book. 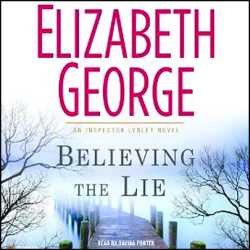 Some of Elizabeth George’s longtime fans have deserted her, partly because in recent years, her books became too dark. Worst of all, she killed off Inspector Tommy Lynley’s wonderful wife, Helen, along with their unborn child. Then she wrote a horrifying book about the dysfunctional family and society that produced the 12-year-old boy who shot Helen for no good reason. And she wrote about Lynley’s grief, and his efforts to get a grip on his life, including his slide into a risky affair.

The reasons that some fans have deserted George are closely akin to the reasons some longtime followers stick with her, trying each new book: They care about the characters, they really want to know what happens to them, and they know George is capable of writing great fiction.

I’ve stuck with her, but I’ll have to admit that I might have felt a little trepidation about tackling the 624 pages of the print edition of this new novel. I had no hesitation, however, about sliding the first CD into my car’s player, and even though the audio version lasts a whopping 23 hours, I was sad when it ended and I had to withdraw from Lynley’s world until George gives us her next book. This novel is not as dark as its recent predecessors.

Believing the Lie is a complex book with many subplots involving Lynley, his sidekick Barbara Havers, her neighbors, Lynley’s love interest, and his friends Simon and Deborah St. James. Not to mention Zed Benjamin, a gawky poet who’s trying to make it as a reporter for one of London’s most notorious tabloids. And all those stories and problems are in play before Lynley even gets involved with what turns out to be an extremely murky situation.

Lynley is sent undercover to Cumbria to investigate the death of Ian Cresswell, a key executive in a lucrative firm that makes plumbing supplies. Cresswell’s uncle, Bernard Fairclough, the husband of the company’s owner, asks for the investigation through the old-boy network.

Lynley is mystified from the beginning, because the death has been ruled accidental, and most signs suggest the ruling was correct. Why would Fairclough want to look further? If anyone had a motive to murder Ian Cresswell, that person is probably very closely related to Fairclough.

As it turns out, there are plenty of motives. There also, Lynley soon begins to realize, are many secrets in the extended Fairclough family. And a murder investigation, even an off-the-record one, has a way of unearthing dangerous secrets that may have nothing to do with the murder.

Hampered by working undercover, Lynley calls on his old friends Simon and Deborah St. James to come to Cumbria and help. He also enlists Havers back in London, even though doing so risks the ire of their boss – the woman Lynley has been seeing. The “guv” is already angry because she hasn’t been told where the higher-ups have sent Lynley and what he’s doing there.

What he’s doing is trying to make sense of what he’s discovering about the Faircloughs and how it might relate to Cresswell’s death. Cresswell, Fairclough’s nephew, left an ex-wife who is extremely bitter because he left her for a man; the other man, who inherits the farm where they’d been living; and two damaged children, one of them a self-destructive adolescent boy. Fairclough’s adult son, Nicholas, is a recovering drug addict with a beautiful, mysterious wife. Fairclough also has two grown daughters, one of whom seems to have a suspicious hold over her parents.

All these people have their stories, their secrets. Davina Porter’s excellent reading deserves a great deal of credit for helping the listener maintain a clear sense of all the characters and developments, as the novel switches among the various dramas.

In the end, this book is less a conventional mystery or suspense story than an examination of human nature, the interworkings of families, and the damage that can be done by festering secrets.

Some things work out well among these many related stories, and some not so well. There is much to be resolved among Lynley’s circle of friends. One very good thing is that Lynley seems to be coming to terms with Helen’s death. He appears ready to move on with his own life in, I hope, future novels.

Readers who are unfamiliar with this series should not start with this or other recent novels. It’s better to meet and start to care for Lynley and company in George’s earlier books.