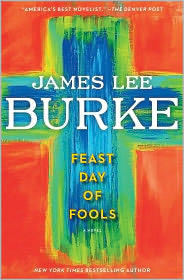 In a James Lee Burke novel, the landscape always comes alive. The Louisiana bayous where Deputy Sheriff Dave Robichaux parlays justice reek of the evil men do to each other and the land, the ground throbs with the march of unseen forces. No venal sin disappears; it simply drops down into the soil, merges with the swamps.

In Burke’s latest series, the locale may change, but the allegory doesn’t. Sheriff Hackberry Holland holds sway over a patch of land in Southwest Texas where “… from the time of Cortes to the present, a martial and savage spirit had ruled these hills and it was no coincidence that a sunset in this fine place looked like the electrified blood of Christ.” Hackberry wonders if something has not come into the loves of this reach of border country, “like a spiritual malignancy irradiating the land with its poisonous substance, remaking the people in its image.”

Holland, a reformed reprobate cut from the same cloth as Dave Robichaux, brings quite a history to his beloved county — Korean vet, ex-congressman, civil rights lawyer, womanizer, lawman.  He’s past 80, and feels older “…in the way people feel old when they have more knowledge of the world than they need… If age had marked a change in him, it lay in his acceptance that loneliness and an abiding sense of loss were the only companions some people would ever have.”  He lives alone on his ranch and doesn’t suffer fools.

Unfortunately, the fools find him anyway. These are fools in the medieval sense, those “lover-level dysfunctional people in the church (who) were allowed to do whatever they wanted” on the Feast Day of Fools. “They got it out of their system, and the next day they all came to church hungover and were forgiven.”  Now those same dregs trail their “…BO around the desert and terrorize unarmed people and pretend (to be) the scourge of God.”

They certainly are the scourge of Holland’s life. Most of them are after one man, Noie Barnum, a weapons designer who has developed “problems of conscience” and will give his plans to foreign elements.  A long list of people wants to buy, sell, kill, and/or prevent him from doing so: Krill, a mercenary from Central America who carries his dead, mummified children around in a box; Josef Solokoff, a Russian criminal “who slithered through a hole in the immigration process during the Cold War”; Temple Dowling, the son of a senator, who makes missiles and moves on little girls; and Preacher Jack Collins, who uses a Thompson submachine gun to silence the voice of his mother in his head.

Unlike most other villains (straw men set up to propel a plot), Burke’s bad guys have added dimension, including an inner dialogue that drives them. They also trail after them traumatic backstories touched by America’s past “sins” – the Cold War, Central America, corrupt government and child abuse, to name a few. Holland takes them on with a cast of well-defined secondary characters: Pam, the deputy sheriff who would do anything for him day or night; Danny Boy, the town drunk who sees things in the desert; and Ethan Riser, an FBI agent on his way out of this life. This conglomerate of righteous citizens foils the fools with a lot of firepower and the finest writing in current American literature. Soon, the echo of gunshots will fade away, and Holland can enjoy his landscape, “a cathedral in its own right,” once again — until Burke comes up with another feast of fools.