Pride and prejudice and peril

Jane Austen is such an interesting literary phenomenon. She wrote novels in which very little happened, other than people going to balls, taking walks, getting married and worrying about how many pounds a year they have or might expect to have. Some of her characters are deliberately portrayed as silly; others are admirable because they have values and principles even if the society in which they live is rather shallow.

And yet – people have loved these books for centuries. Writers have imitated them, spoofed them and used them as fodder for their own books. Despite being an English major in college, I spent the first few decades of my life without reading any of Jane Austen’s works. I had read books in which Jane Austen figured as a character, including Stephanie Barron’s delightful mystery series starring Jane as sleuth, and novels drawing on the phenomenon, such as Karen Joy Fowler’s The Jane Austen Book Club.

Not so long ago, I used a Christmas gift card to buy a volume of the complete works of Jane Austen, resolving to read them in the new year. But the thick book lay on my bedside table, shunted aside in favor of new books that demanded my reviews. It was only when I left fulltime newspaper work and took on a college teaching gig that had me in the car two hours each way two or three days a week that I “read” Jane Austen. I listened to all her books as audio books, checked out from various libraries. And I adored them. Finally, I completely understood the attraction. Little of note may happen, but all is related with such wit and wisdom.

And I also am a great fan of mystery novels, particularly British mysteries. So I was thrilled when Death Comes to Pemberley arrived with the review books in December. 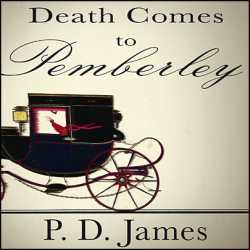 Others have written novels in which Jane Austen is a character, including Stephanie Barron’s entertaining mystery series. But what author would have the nerve to attempt a sequel to Pride and Prejudice? And what author would dare make that sequel something so alien to Austen’s sensibilities – a murder mystery? Fortunately the person who was so emboldened was perhaps the only one who could be up to the task, P.D. James, the grandest dame of contemporary British mystery writers.

Now in her 90s and possessing a dazzling array of British and international awards and honors, James has earned the self-confidence it must have taken to embark on such a project. Even so, she apologizes to “the shade of Jane Austen” in an author’s note. Austen made it clear, James point out, that she did not choose to “dwell on guilt and misery,” so she never would have written a murder mystery. And had Austen done so, James acknowledges, she would have “done it better.”

Maybe so, but P.D. James has done a commendable job herself, producing a book well worth the read or the listen. What a delight this is for the many readers who love both Austen and murders set on British estates or in villages.

When this novel begins, Elizabeth, nee Bennett, and her beloved Darcy have been married for six years, after they managed to overcome their respective prides and prejudices in Austen’s beloved novel. They have two fine sons, who, in the fashion of the day, are the joys of their life, even though (or perhaps because?) they spend most of their time well cared for by others in the nursery. Despite her inferior origins, Elizabeth has earned respect and affection as the mistress of Pemberley.

Life is good. At this particular moment, it is also quite busy, because it is the eve of Lady Anne’s ball, the annual fall social event instituted years earlier by Darcy’s late mother. Elizabeth’s beloved sister, Jane, and her husband, Bingley, have already arrived from their nearby estate for the weekend. Their young friend Mr. Alveston, a lawyer from London who is a frequent visitor, is with them. Also in attendance is Colonel Fitzwilliam, Darcy’s cousin, who shared with him the responsibility of guardianship of Darcy’s sister, Georgiana. Georgiana is now grown, and the one cloud on Elizabeth’s horizon is possible unpleasantness over her choice of a husband.

This scene of domestic felicity is shattered on the night before the ball, when horses gallop madly up the drive, bringing a coach and terrible news. Elizabeth and Jane’s disreputable, younger sister Lydia tumbles out of the coach, close to hysterics. It seems that even though she and her reprobate husband Wickham have never been received at Pemberley, she had been on her way to make a surprise appearance at the ball. But on the way, her husband’s friend and companion had suddenly demanded that the coach stop. He had run into the darkness of Pemberley’s forest, and Wickham had run after him. Gunshots rang out, and Lydia had demanded that the coachman take her to Pemberley immediately.

When Darcy and the other gentlemen set out into the forest to investigate, they are appalled to find a bloody Wickham bending over the body of his friend, who is quite dead.

Gloom descends on Pemberley, as the Darcys resolve, of course, to do all the right things. An investigation must be mounted, going through proper channels. Since the murder happened on the Pemberley estate, and since the prime suspect is a relative by marriage, even though estranged, the Darcys are in a delicate situation. The ball, of course, must be canceled, but that is the least of their worries.

What will become of Lydia? Will the investigation unearth unpleasantness from the past, secrets such as the reason that Wickham is so unwelcome at Pemberley? Will a permanent stain sully the family and the estate?

James does a marvelous job of describing, as Austen would, the priorities, concerns and conventions of the world in which the Darcys live. The reader has no problem believing that this really is the continuing story of Elizabeth and Darcy, that these developments might really have occurred and been dealt with in this fashion.

This is a mystery, and James does give us hints about the murder, as well as an eventual solution. But neither Jane nor Darcy changes personality to begin intensive sleuthing; instead, the answers are revealed in a satisfactory and credible way.

Rosalyn Landor reads the book in fine fashion, providing all the pleasures to be hoped for when listening to a well-written British novel read by a well-spoken British actress.

Did this sequel have to be written? Did Elizabeth and Darcy need to deal with a murder at Pemberley? Probably not, but I’m glad P.D. James was bold enough to write this story. And I think that if Jane Austen were around, she might have found such a novel a worthwhile literary diversion, even if it does touch on – though not really “dwell on” – “guilt and misery.”

2 Responses to Pride and prejudice and peril