Read it and shiver – and laugh 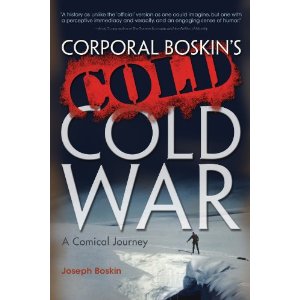 As a scholar of American culture, Prof. Joseph Boskin is very familiar with the work of Joseph Heller.

As a Korean War-era draftee, Corporal Boskin can attest to the accuracy of Heller’s masterpiece, Catch-22.

Boskin, a Boston University historian best known for his work in American humor, has written a number of academic works, the kind that end up on the reading lists for American studies and history courses. But for years, Boskin, who is a friend of mine, has wanted to tell his personal story of a year spent in Greenland in the U.S. Army.

With a master’s degree in hand, Boskin entered the Army at the height of the Korean War. He was sent to Greenland to serve as project historian for something right out of Catch-22. The Army wanted to see if it could fully operate an all-weather air base in the frozen tundra, threateningly close to the Soviet Union.

What follows is theater of the absurd as one screw-up follows another, most of them funny, some of them tragic. No one tries to sell chocolate-covered cotton balls to the troops or subcontracts with the Russians to bomb the base, but there is a hysterically true story about the making of ice cream that rivals what Heller dreamed up for his 1961 novel.

Now it may be that I read this book while visiting my sister’s always freezing cold house in Boston over Thanksgiving, but I’d prefer to credit Boskin’s writing for this: I shivered through the entire reading – which really didn’t take more than a few hours. How can you not freeze when reading of such ridiculous conditions, where a 20-degree day is considered warm and very unusual? Temperatures in the minus-30 range were more typical.

And through it all, Corporal Boskin, preparing for a career as an academic historian, was trying to compile an accurate history, including successes and failures, only to encounter an Army brass that didn’t want anything of the kind. True accounts of setbacks are not the Army way. It is here that the story most resembles the zaniness of M*A*S*H or F Troop.

There are parts of the book that I’d have advised Joe to excise or compress. This short memoir could actually be even a bit shorter. But the story moves very well for the most part. It’s funny, and it’s ridiculous. Readers must simply put out of mind how much money their government wasted with this crazy idea – and, of course, the lives lost, too.

As a bonus, the professorial side of the author includes a thoughtful essay on the nature of memoirs in the prologues. The guy’s brainy side can’t help but show through.