Not really a Christmas book – but who cares?

This book arrived at the same time as several Christmas-themed volumes, so naturally I thought it was another holiday story. After all, its title is Twelve Drummers Drumming. So I put it on the stack right under Anne Perry’s annual Christmas mystery. Imagine my surprise when I discovered that the action takes place in the merry month of May, and the only connection to the winter holiday is the surname of the detective who makes his debut in this mystery. 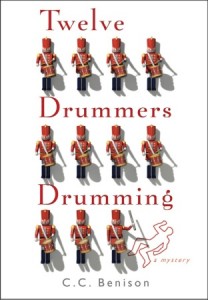 Although this book is not a Christmas holiday story, it did present a welcome gift: the enjoyable first volume in what is promised as a new mystery series. Emotionally battered by the senseless murder of his wife, Father Thomas Christmas seeks refuge for himself and his now motherless 9-year-old daughter in what seems to be a quintessential English village. When he accepts the vacant position of vicar in Thornford Regis, Tom believes he has found a haven far from big-city crime and violence.

Imagine his dismay when the body of 19-year-old Sybella Parry is found stuffed into one of the giant Japanese drums being readied for the village’s May Faire. It’s terrible that a young life has been brutally cut short. It’s also terrible that Tom, and more important, his daughter, Miranda, must face the reality that no place is immune to evil.

It’s pretty obvious that the murderer was likely someone from the village – likely, even one of Tom’s parishioners. Looking at the village in a disturbing new light, Tom begins to ask questions and look into hidden corners. He finds more secrets than he bargained for. There is no shortage of suspects, including some people who are close to Tom and the church. Eventually, he begins to wonder if the murder could have some connection to his predecessor as vicar, whose disappearance is still unexplained.

Father Christmas – oops, Father Tom, as he prefers to be called – sets about finding the answers in the best tradition of British village mysteries. He’s an engaging person and a perceptive sleuth. Thornford Regis is peopled with just the kind of characters who ought to live there, whom the author thoughtfully details in a “Cast of Characters” at the start of the book.

C.C. Benison has pulled off the not inconsiderable feat of writing a believable village mystery set in the present. He’s hard at work, we are told, on Eleven Pipers Piping. These mysteries may not be Yuletide books, but they are sure to become a Christmas tradition.