For nine years now, Anne Perry has been writing a short novel for Christmas, drawing on her expert knowledge of Victorian England, as well as some of her familiar characters. For Perry’s many fans, the arrival of her latest holiday book is as much a herald of the season as the parade, the bell ringers or the lights on downtown streets. 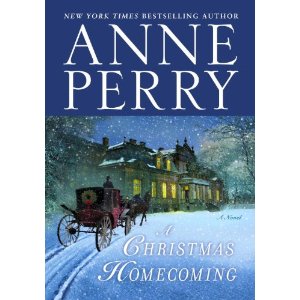 The 2010 holiday novel, A Christmas Odyssey, was one of the darkest, most chilling books I’ve read, by Anne Perry or any other author. It took the characters and the reader into London’s subterranean tunnels and sewers, where the city’s most depraved residents contend with rats and other horrid creatures. Good triumphed in the end, but the journey toward that resolution was difficult.

With that memory in mind, I hesitated to open this year’s holiday offering. But an Anne Perry book is not to be resisted, so I started reading.

I am happy to report that although murder most foul is involved – this is, after all, an Anne Perry mystery – A Christmas Homecoming is not as grim a story as its immediate predecessor.

Instead of London’s netherworld, the setting is a country mansion near a Yorkshire fishing village. Some time back, Caroline, the widowed mother of Charlotte Pitt of the Thomas and Charlotte Pitt mystery series, threw caution to the winds and married Joshua Fielding, a man who is not only several years younger but, even more shocking, an actor by profession.

Now Joshua and his troupe have been invited to spend the holidays at a wealthy man’s home, staging a play that the man’s daughter has adapted from Bram Stoker’s novel Dracula. The vampire, it seems, is all the rage in fashionable England these days, and this part of the Yorkshire coast is where Stoker’s Dracula arrived in England.

Pleasing the wealthy gentleman, Charles Netheridge, is essential, because Joshua is counting on him to bankroll the theatrical troupe’s spring season.

Caroline is drawn to Netheridge’s daughter, Alice, whose spunk reminds her of Charlotte. But the play Alice has devised is nearly hopeless. To make matters worse, a relentless snowstorm confines everyone to the mansion, and tempers grow short among the actors. Maybe it’s the subject matter of the play – or maybe it’s something more – but evil seems to be close at hand.

Joshua struggles to keep everyone happy and to make the play workable without offending the Netheridges – until a dark stranger arrives in the midst of the blizzard. Surprisingly, the mysterious man seems to have a real genius for stagecraft, and his suggestions make a successful production a real possibility.

But a dramatic murder and other sinister developments intervene. Worried that when the snow abates and the authorities arrive, they will want to pin the murder on one of the actors rather than local residents, Caroline determines to use what she’s learned from her son-in-law and do her own investigation.

This is a thought-provoking novel. It uses the Dracula legend and the mystery at hand to ask whether evil is something purely external, or whether the fault is within those who yield to its seductive charms. Can inner goodness prevail?

This book will entertain you while it gets you in the proper frame of mind and heart to celebrate Christmas.