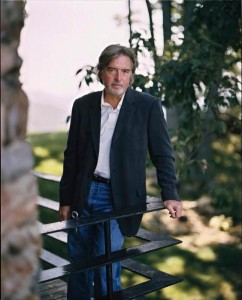 Remember Charles Frazier, the North Carolina writer who made a huge splash with his first novel, Cold Mountain, in 1997? Then word got out that he received a staggeringly large advance for his second novel, Thirteen Moons, nine years later. As a result, there was more media attention to the business of publishing his books than to the content of his books. The second novel was also a best seller, but not as unqualified a success in sales or reviews as the first.

Frazier’s third novel is out now, and maybe in hopes of having this novel judged on its merits rather than being endlessly compared to its predecessors, he has written a book that’s quite different from the other two. Most noticeably, this one is set not in the 19th century but in the early 1960s.

My interview with Frazier and a (laudatory) review of the new book, Nightwoods, are in today’s Greensboro News & Record (Oct. 30). The Greensboro paper continues to do a fine job of publishing locally written book reviews focusing on books of North Carolina interest.

There’s a tidbit from the interview that I did not work into the News & Record story, one that might be of interest to longtime fans of North Carolina fiction. Frazier’s new novel has a memorable, frightening scene involving a swarm of rattlesnakes sunning themselves on a rocky mountain outcropping on an unusually warm November day. That brought to my mind John Ehle’s unforgettable rattlesnake scene in his 1964 novel The Land Breakers (reprinted in 2006 by Press 53).  Ehle and Frazier both grew up in the mountains near Asheville, and both mine that rugged territory for their fiction. Frazier told me, however, that he has not read The Land Breakers, although he understands that Ehle drew on a rattlesnake story that’s been told and retold for generations. His own scene, Frazier, said, grew out of an experience he had combined with an encounter related to him by a friend.

I listened to the audio books version of Nightwoods in addition to reading the print version. I don’t want to repeat what I wrote for the Greensboro paper, but I’ll briefly review the audio book.

This suspenseful novel will keep you on edge right up to the violent climax. The villain is particularly heartless and the potential victims heartbreakingly vulnerable. And yet this is ultimately a book that affirms the possibilities that love, or something close to it, can gain a foothold even in the face of evil.

Charles Frazier has moved into the 20th century with his third novel, but the early 1960s in a remote mountain town in western North Carolina is very different from that same period in much of the United States. The heroine, Luce, lives in an abandoned, crumbling hunting lodge on the shore of a lake. She has chosen to live alone, to withdraw as much as possible from even the society of the small town whose lights she can see across the lake at night. And even the people in that town lead a largely isolated existence. The big-city newspapers don’t reach them, and it’s relatively easy for a stranger in town to keep his past a secret – at least for a while.

In addition to the 20th-century setting, another major element that distinguishes this novel from Frazier’s two earlier ones is that the main character is a woman, Luce. She is strong despite – or maybe because of – the traumatic experience that led her to cut herself off from people and, as much as possible, from money and the need to earn it.

Luce’s self-sufficient isolation is shattered when she must take in the twin children of her murdered sister. The twins – a boy and a girl, maybe 5 or 6 years old – are obviously psychologically damaged. They live in a world of their own, refusing to talk and communicating largely through violence.

Just dealing with these difficult children would be challenge enough, but Luce soon has reason to believe that the man who killed their mother intends to harm them. She has almost no one to turn to for help except a wise, elderly mountain woman who lives nearby and Stubblefield, a man battling his own problems. Stubblefield arrives in town because he’s inherited his grandfather’s property, including the lodge.

Frazier’s detailed, sometimes poetic descriptions of the mountains’ beautiful, unforgiving natural world are here, largely in descriptive passages and in what Luce tells the children as she tries to connect with them. But much of the book is blunt and direct dialogue and glimpses into the thoughts of various characters, including the murderer as well as Luce and Stubblefield.

Will Patton puts his actor’s skills to good use reading this book. Frazier chooses to write in third person to give himself some distance from the characters, and following that lead, Patton does not try to change voices when the point of view shifts. Instead, he reads all in a Southern accent that’s not overdone and has an edge of roughness. The voice is ideal both for the wary outlook of the main characters and for the building suspense. My only quibble is over Patton’s jarring pronunciation of the word “galax,” that mountain forest plant that those of us from around here call “GAY-lax.” In his reading, it came out something like “guh-LAX.” I asked Frazier about that when I interviewed him, and, wincingly, he said folks in Andrews, his hometown, also call it “GAY-lax.” But that’s a small flaw in an otherwise fine production.