Madam India Black, at it again

If you enjoy reading fiction set in Victorian England, then give this India Black series a try. Dickens, of course, showed the chasm between rich and poor, and focused his literary light on the dark side of London inhabited by thieves and worse. Today, Anne Perry, in her two mystery series, does an eye-opening job of making us aware of the crime, squalor and poverty that existed side by side with royalty, fine drawing rooms and banquet halls.

In her India Black novels, Carol K. Carr goes a step further, giving us a madam of an upscale London brothel as our heroine. If the idea of reading about the degradation of women and seamy sex puts you off, don’t worry. Carr admirably pulls off the difficult feat of making India’s stories suspenseful, even humorous, without glorifying or wallowing in prostitution. India is a tough young woman on her own, making her living in one of the few ways available to her. She’s matter of fact about what she does, and she takes pride in running a clean, safe establishment. That she’s a madam is a fact of her life. Her adventures have to do with espionage and mystery away from the brothel, and her life experience makes her a clear-eyed observer of human nature with all its weaknesses. 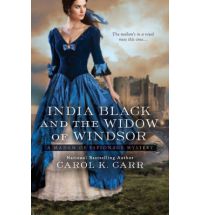 India Black is back in a spirited romp through wintry Scotland that’s even more entertaining than her outing as a spy.

As those who read the series debut novel know, when a prominent member of the British government inconsiderately dropped dead in her brothel, losing some important papers in the process, India Black acquitted herself admirably in the damage-control effort. In India Black, she was pressed into service helping French, a handsome British spy, recover the memo before it gave strategic information to the Russians. Her capabilities caught the eye of Disraeli, the prime minister, familiarly known as Dizzy.

So When Dizzy runs into another delicate and potentially serious situation, he turns to India as well as French. A séance has made Queen Victoria (aka Vicky) believe that her dear departed Prince Albert wants her to spend Christmas at their home in Balmoral, Scotland. Aside from the fact that he hates the cold, drafty house, Dizzy is afraid that Scottish nationalists have manipulated the queen as part of a plot to assassinate her.

French does his spying at Balmoral as the British gentleman he is, but India must play the role of lady’s maid to infiltrate what’s going on in the world of the servants. Vincent, the wily street urchin who’s devoted to India, decides to tag along, of course.

India’s assignment is to be the personal assistant – which can include anything, any time of day or night – to an aged marchioness who is some sort of cousin to the queen. The old lady is addicted to snuff, and one of India’s greatest challenges is to keep her from sniffing anything handy – sugar, pepper, you name it – up her nose, often with messily disastrous results. The old lady is completely dotty – or is she? As events transpire, India finds herself wondering more and more what’s really going on.

There’re intrigue and danger aplenty as India, French and Vincent conspire to try to save the queen from imminent danger, without noticeably disrupting the festivities. Carol Carr paints an amusing picture of Queen Victoria’s family and retinue. The marchioness is hilarious in herself, as are India’s attempts to play her unaccustomed servant’s role convincingly.

You’ll enjoy this fast-paced, irreverent novel a lot more than the queen’s guests enjoyed Christmas at Balmoral. The possibility of romance in the air, plus a hint of revelations to come about India’s past, make the reader impatient for the next book in this highly original series.