A tale of truffles and troubles

While Bob Moyer was in Germany recently, he reviewed another in Martin Walker’s series of “mysteries of the French Countryside.” Go figure. 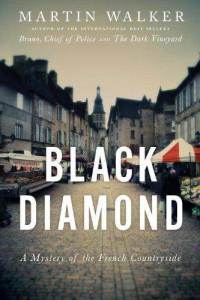 Peril has appeared on the horizon of St. Denis, where Bruno is chief of police. Actually, he is the whole department, and he is unprepared for this danger. He has protected the town from murderers, thieves, arsonists, terrorists, tree-huggers, Communists, Fascists, and, yes, even Americans, but he doesn’t know what to do about this – a new suitor for Pamela, the English woman who lives just outside of town.

Rich and handsome, Pons the younger returns to his hometown to set up a “green” restaurant. Bruno is taken aback when Pamela is taken with the dashing young entrepreneur. Pons is more than a personal menace to Bruno, however; he leads the Greens who have forced the closure of the lumber mill. The town’s largest employer, the mill is owned by Pons the elder, from whom the younger is bitterly estranged. Both the town’s economy and calm are imperiled. Together, the father and son pose a political threat to Bruno; if they run for mayor, one of the two will drain enough votes for the other to defeat the current office holder – Bruno’s patron and protector.

Ah, but these are trifles in comparison with the danger to the truffle market, the “black diamonds” of the title. Someone has been adding inferior product to truffles shipped from the local market across France; hundreds of thousands of dollars are at risk if the market’s reputation suffers. Bruno, who raises truffles himself, takes on the task of sniffing out the solution.

To complicate matters further (perhaps a bit much by the author), the local markets themselves have been shaken by attacks from Chinese gangs trying to break the hold that the established Vietnamese community has. Bruno, of course, takes all this seriously:  “… these Vietnamese were now French citizens and Bruno’s neighbors … their safety was his responsibility.”

One thing is not endangered here, however – the recording of French tradition in these books, thinly disguised as soft-boiled mysteries. Bruno’s fans will not be disappointed by the three pages he takes to prepare a venison stew, and then the memorial dinner in the baron’s castle for his friend:  ” ‘Hercule,’ they chorused, raised the glasses to his photograph and … settled to their meal of truffle soup made of Hercule’s stock, pate that he had helped to make, roast pigeon that had been one of his favorite dishes and Bruno’s venison stew from a deer that he had shot.”  The author loves the Perigord as much as Bruno does.

While he’s digging around in the truffle mystery, chasing around Illegal Chinese, feasting on Vietnamese food and diving into manure piles, Bruno comes up with the intricate connection between the lumber mill’s closing, the Chinese gangs, the election and Hercule’s death. Once again, Walker demonstrates how the past is never past, and the present is imperiled if we think so. In a finale that leaves Bruno alive but worse for the wear, tranquility returns to his beloved Perigord.

This entry was posted in Mysteries and tagged France, Martin Walker, Mystery, Perigord. Bookmark the permalink.