A wonderful book, with flowers

Here’s another one of those books I might have missed had I not listened to its audio version during my commute (and, truth be told, sometimes while driving a little extra to see what happens next). And what a loss that would have been. This book is a true work of art. 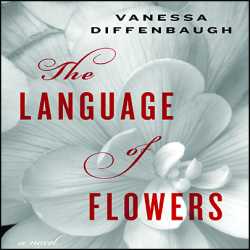 This is a wonderful book that once heard – or, I am sure, read – will not soon be forgotten. Its first-person narration by Victoria Jones, a young woman who grew up in California’s foster-care system, is sometimes painful, sometimes heartbreaking, and ultimately full of grace and hope.

Tara Sands reads Vanessa Diffenbaugh’s prose with great skill, making Victoria speak convincingly. The listener believes that her sometimes flat, unemotional voice is speaking the truth, sad as it is. Victoria is as unforgiving of herself – maybe even more – as she is of those who failed her over and over throughout her lonely childhood.

We meet Victoria on her 18th birthday, when she is about to be liberated from the last of a series of group homes she’s lived in since, at age 10, she was officially deemed unadoptable. The social worker who’s found Victoria such a difficult case will take her to a transitional house, where she will have three months to find a job and start paying for her keep.

As Victoria tells us, however, she does not find a job, does not really even try, and in three months, she is an 18-year-old homeless person in San Francisco.

Victoria’s story proceeds in alternating chapters, going back and forth from the story of what happened when she was 10 and had her last big chance at adoption to what is happening now, as she tries to make it on her own.

Flowers have long been Victoria’s passion. Though she rarely applied herself in school, she has studied the Victorian notion of the language of flowers with a passion. She knows the symbolic meanings of many flowers and plants, and throughout her lonely adolescence she often bestowed flowers on people to whom she wanted to deliver a message. That the recipients rarely if ever understood did not matter to her.

Homeless, she lives in a public park, where she cultivates a small, private garden made from stolen plants. Realizing she can’t live indefinitely by stealing and eating what people leave on their plates in restaurants, Victoria manages to persuade a local florist, Renata, to hire her. At the florist shop, the girl’s almost magical knowledge of flowers and their meanings draws in customers who believe she can help them in their personal lives.

But her job at the florist shop also connects her with people in a way she has long worked to avoid. And one of those people turns out to have a link to that pivotal experience when Victoria was 10.

Diffenbaugh, we are told, has been a foster mother and has worked with youth in low-income communities. She uses her experiences well in her fiction, doing an outstanding job of making Victoria believable. Victoria makes no excuses for her often-terrible behavior, which she describes matter-of-factly. But the listener/reader comes to understand that she is pushing people away because she’s been disappointed so many times she no longer lets herself hope. Without offering apologies or belaboring the psychology at work, Diffenbaugh makes us care about Victoria, someone we might go out of our way to avoid in real life.

The book’s two storylines converge at last, and Victoria is confronted with major choices. The biggest decision she faces is whether the chance to love and be loved is worth the risk of hurting and being hurt.

The printed book includes the text of the “Dictionary of Flowers” that Victoria works on throughout much of the book. That’s a nice addition that you don’t get from the audio version. But what I really wanted was to see that dictionary illustrated with the photographs that Victoria painstakingly took of each of the flowers whose attributes she described.

Whether you listen to this fine recording or read the book yourself, this is a beautiful story, full of much of the hard truth of life, but also of the love and possibility of redemption that make life worth living.

3 Responses to A wonderful book, with flowers