Off to the South of Thailand

It’s always a pleasure to run across another good author. And if you make this discovery by reading what’s billed as the first in a new series, that’s all the better. Colin Cotterill is, apparently, someone whose works I should have been reading already. He’s done quite well with a series featuring Dr. Siri, a coroner in Laos, without my having ever stumbled upon him. He’s also, I learn by visiting his delightful website, a cartoonist and quite an amusing guy, or chappy, as he puts it in his British/Aussie way.

But fortunately, my consciousness has been raised by the arrival of Killed at the Whim of a Hat, which is the start of his new series about Jimm Juree. 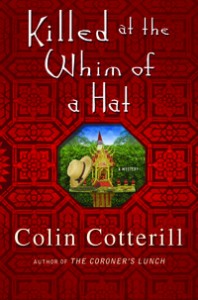 I suppose it’s inevitable that Colin Cotterill’s Jimm Juree series set in a remote village on the coast of Thailand is being compared to Alexander McCall Smith’s No. 1 Ladies’ Detective Agency series, set in Botswana.

I find two main points of similarity: Judging from this first book, Cotterill’s series will be highly enjoyable, just as McCall Smith’s is. And they both, of course, create settings that are unfamiliar and thus interesting to most American readers, especially those who read mysteries as much for the local flavor and insights into human nature they offer as for any solving of crimes. Both authors do a wonderful job of making an unfamiliar world come alive in vivid detail.

In many other ways, however, this inaugural book in the Jim Juree series is quite different from the series starring Precious Ramotswe, a proper, matronly woman who is wise in the ways of humans, even if a bit naïve in the intricacies of the modern world. Jimm seems younger and savvier.

Part of the charm of the Ladies’ Detective Agency series is the gentle, ultimately uplifting tone. There is humor in the books, but it tends to be quiet, understated humor – the foibles of Mma Ramotswe’s associates or the little lies that people tell to themselves as well as to others.

Killed at the Whim of a Hat is edgier, the humor a bit sharper, coming as it does from the tart tongue of Jimm, who tells the tale in first person.

Jimm has reason to be a bit cynical about things. She was about to become the senior crime reporter for the Chiang Mai Daily Mail when her mother, eccentric on her best days, unexpectedly sold everything the family had in the city – the house, the shop – and sank the proceeds into a run-down resort in a remote fishing area.

Jimm’s whole family is unusual, to put it mildly. Her older brother became a woman and was, for a while, a beauty queen. Her “current” brother is obsessive about bodybuilding, and thinks of little else. Her grandfather, a former policeman, rarely speaks. But the family is close, and when Jimm’s mother, Mair, decides to head south, everyone except Sissi, whose lucrative and esoteric business requires good Internet access, moves with her.

Jimm, who had been sure that her professional life was over, is heartened to discover that there is crime in this remote seaside area. Plenty of crime, in fact – enough to give her visions of great success as a free-lance writer.

First, an old hippie van with two skeletons perched in the front seat is unearthed in a farmer’s field. Hardly has Jimm begun to investigate that discovery when an abbot at a nearby Buddhist monastery is murdered in bizarre and gory circumstances.

Jimm is on the stories, with help – expected and unexpected – from various members of her odd family. Life is good again for Jimm, and the reading is good for her newfound fans.