Have some bread and a good story

Out of some probably silly literary snobbery, I tend to shy away from the sub-genre of novel about groups of women. I know there are some fine ones. Lee Smith’s The Last Girls, about a reunion of four college suite mates on a riverboat trip down the Mississippi, is a wonderful book. I read that one because I already knew I love Lee Smith’s fiction, and I was willing to go along with her as she tried yet another type of story.

Recently, I enjoyed listening to the audio book A Cup of Friendship, by Deborah Rodriguez, but I attributed my enjoyment to the unusual setting, a coffee house in Afghanistan.

But now I’ve tried another recent “women’s” novel via audio book, despite my fears that it might be a paler version of Rodriguez’s book, set in small-town USA rather than war-torn Kabul.  Again, I surprised myself by really enjoying the book.  I don’t know if I would have read it in the print version, but I quickly got hooked by the various stories as I listened. If I’d missed this book out of false snobbery, that would have been my loss. 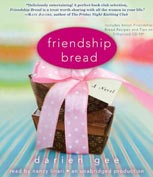 When Julia Evarts arrives home to find a loaf of a sweet bread, a bag of glop that turns out to be bread starter and a recipe, her impulse is to throw the mess away. Ever since her son died in a terrible accident, Julia has barely been able to go through the motions of living. But her 5-year-old daughter, Gracie, who was born just a few months after the accident, begs Julia to follow the instructions and make the bread. It’s easier to give in than to argue, so Julia and Gracie feed and care for the starter as directed, and bake some Amish Friendship Bread.

Julia lives in Avalon, Illinois, a town just far enough away from Chicago to avoid being a suburb. It’s a genuine small town, the kind where everybody knows everybody else’s business. And because Julia doesn’t want to talk about her son’s death, or feel that she’s the object of pity, she has withdrawn from nearly everyone – including her younger sister, with whom she was once very close, and even, in most ways, her husband.

Part of the instructions that came with the bread and starter say to share it with others, so Gracie takes some bags of starter to school. Everyone who starts dealing with the starter ends up with lots to share, so soon Amish Friendship Bread starter is spreading through the town. A study of how it moved might have yielded a good sociology master’s thesis. Instead, in Darien Gee’s novel, it yielded a delightful story.

Julia is at the core of the story, of course. But starter is a living substance, and as it spreads through Avalon, it becomes a metaphor for spreading friendship and love.

Julia makes some new friends, notably an elderly widow who has moved to town and opened a tea salon, and a famous former concert cellist whose husband is in the process of dumping her in Avalon.

The circles of relationships and stories spread much further than those three women. Julia’s estranged sister becomes involved in the Friendship Bread saga through her relationship with a co-worker at the town newspaper.

Some of the characters drawn into the Friendship Bread circle are fully developed. Others figure in brief anecdotes that reveal Gee’s refreshing sense of humor.

In the end, everything is resolved, with lessons learned about life and love and what’s really important. But you really don’t mind if things are tied together maybe a tad too neatly. All you really want is to sit down with a good friend, try some of that Amish Friendship Bread, and talk about what a pleasure it was to listen to or read the book.

Nancy Linari does an outstanding job with the male voices as well as the female. And yes, there are well-developed male characters in the book. I’ll have to adjust yet another of my literary prejudices.

1 Response to Have some bread and a good story