Paul O’Connor, Briar Patch Books contributing editor, is on the road this summer. He’s had a little time to read and reflect on the national pastime, his own particular passion for the St. Louis Cardinals, the greatest Cardinal of them all – and life in America. 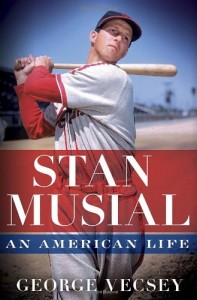 Shortly after my father died in 1962, my mother moved the family into her sisters’ neighborhood partly so I’d be close to two uncles and my two male cousins.

I had barely slipped on my Spalding 6-finger baseball glove when my older cousin, Richard, explained that my extended family’s religion included as much devotion to the St. Louis Cardinals as to the cardinals of the Roman Catholic Church – that from the head altar boy at St. Claire’s.

It wasn’t long, however, before I was the chief seminarian of this Connecticut parish of a Missouri ball club, a Cardinal fan more devout than any other, except maybe Uncle Joe, the one who knew all the batting and slugging averages, ERAs and fielding percentages. And, in this newfound religion, I understood that there was only one pope then, the one who remains late in life the only one now: Stan “The Man” Musial.

Veteran New York Times columnist George Vecsey makes no more pretense of writing a detached biography of St. Stanislaw than I would. To hell with journalistic independence, separation and objectivity when dealing with the likes of this Man; that’s all stuff for covering the likes of Bev Perdue and Richard Burr. Vecsey may have never been a Cardinals beat writer, but he was a Musial admirer from his earliest days on the baseball beat, and he says he went into this biography with the intent of righting a baseball history wrong.

In the Musial era – 1940 to 1963 – the names of three great baseball players stand out above the rest for their accomplishments on the field: Ted Williams, Joe DiMaggio and Musial. Yet Musial is rarely mentioned in the same breath with the stars of the two teams from larger media markets, even though his performance exceeded those of the other two in some categories, was every bit their match in most others and lagged behind in very few.

At the time of his retirement, Stan Musial’s name was written all through the official baseball records books. (Please don’t confuse official records with these so-called “history making” observations ESPN now makes every night: “Rodriguez just became the first left-handed batter with a last name beginning with R to hit two triples in the same day game held on a Wednesday afternoon in May.”) Musial held real records, and he was very high on the all-time lists for home runs, RBIs, batting average, slugging percentage.

(I once read that Musial had at one point held the record for holding the most official records. I can’t confirm that, so I’ll use the old Italian dictum here: “That’s a story that, if not true, should be.”)

Oh, about the book. Here’s the surprising thing: It’s not really much about baseball. For as good a baseball player as Stan Musial may have been, he is a better person. And that’s mostly what Vecsey writes about, the incomparable decency, friendliness, generosity and wholesomeness of The Man. Page after page is filled with stories offered by his fellow players, his fans, fans of opposing teams and almost anyone off the street who ever dealt with Musial.

The best chapters of the book have nothing to do with baseball. They begin in Musial’s retirement years, when he develops a friendship with the writer James Michener, when he discovers his Polish roots, when he gets close to his former competitors, Williams and DiMaggio. The chapter on his travels through Poland and his meetings with the young Polish cardinal, Karol Wojtyla, later Pope John Paul II, is the best.

As any regular reader of The Times’ sports page already knows, Vecsey is a terrific storyteller, and he does nothing to harm that reputation in this book. This is a fun read, as much for the insight it gives us into the lives of the people around Musial as for what it tells us about the ballplayer. It is also, as the title claims, the story of an American life, a life that began in absolute poverty.

Musial is not well. The back cover photo shows him receiving the Presidential Medal of Freedom from President Obama late last year. He looks frail and ill. But he’s still with us, although my Uncle Joe, who would have really enjoyed this book, died just before it came out in May.

Musial is known for his persistent cheerfulness, for constantly using “wunnerful, wunnerful” to describe life and what was going on it. Well, this is a wunnerful book about a wunnerful guy.