Ann B. Ross of Hendersonville, N.C., is a delightful lady whom I’ve had the privilege of interviewing twice – once for the Winston-Salem Journal back in the 1980s when she published The Pilgrimage, a novel about two orphaned sisters traveling on the Oregon Trail, and then for Our State magazine when her 11th Miss Julia novel was published in 2010. Both times, I thoroughly enjoyed the opportunity to sit a spell and chat with her.

When I interviewed her for Our State, Ann told me that she was astonished that her publishers wanted a sequel after she wrote her first novel about Miss Julia.  Now, she’s out promoting No. 11 in the series even while working away on No. 12, to be released next year.

Like many series books, the Miss Julia tales are not the sort of novel for everyone’s taste. But the many fans of Ann B. Ross and Miss Julia are passionate, waiting eagerly for each new installment.  I would not want a steady literary diet of fare this light, but I’ve enjoyed reading every one of the Miss Julia books – almost as much as sharing a cup of coffee and conversation with their author. 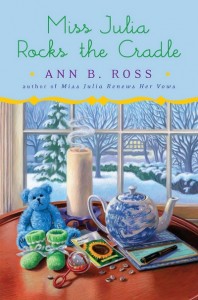 Like Prissy in Gone With the Wind, Miss Julia doesn’t know a thing about birthin’ babies.  After all, she’s a lady of a certain age who never had children of her own. And the only child her late first husband fathered was with another woman while he was still married to and living with Miss Julia, an outrage she did not discover until he died and left his estate to “Little Lloyd.”

After she got over the shock and the insult, Miss Julia dealt with that situation just fine, thank you. Before long, Little Lloyd and his mother, Hazel Marie, had come to live with Miss Julia. If any of the gossips and holier-than-thou folks in their little North Carolina town wanted to make something of the arrangement, they would have a formidable, very proper and very proud Miss Julia to answer to. Miss Julia couldn’t love Little Lloyd more if he were her own, or at least a grandchild. But that doesn’t mean she knows anything about delivering babies.

Nor does she want to learn. That’s why great care has been taken to make sure that Hazel Marie will get to the hospital well ahead of the delivery time for the twins she’s carrying. Hazel Marie’s new husband, Mr. Pickens (you can thank Miss Julia for the fact that they are married before the arrival of the babies), has joined Miss Julia’s ever-expanding household for the duration.

Since the doctors, Mr. Pickens and Etta Mae Wiggins are all looking after Hazel Marie, Miss Julia feels free to investigate some other matters that need her attention. There is, for example, the problem of someone passing bad checks all over town in her name. Then too, there’s the dead body that turns up in a shed behind a schoolteacher’s house.  Of course, she’s promised her husband Sam (yes, she finally tried matrimony again a few books ago, despite her disillusioning first experience) to stop being so nosy and putting herself in harm’s way. But unexpected developments make it necessary for Miss Julia to put her investigative skills to work despite her promise to Sam – after all, she’s afraid she’s about to lose him anyway.

And, not surprisingly for fans of Miss Julia, the best-laid plans about Hazel Marie’s twins also go awry – during a blizzard.

Part of Ross’ success stems from her sense of humor about a community where everybody knows everybody else’s business and people sometimes worry too much about appearances. Her success also grows out of her understanding: Her plots may be the result of an active imagination, but when it comes to the realities of life in a small Southern town, even in the 21st century, she is not making things up. And out of Miss Julia’s antics and predicaments come some gentle lessons about what’s really important in that life.

Readers who think they might like Miss Julia are advised to find the earlier books in paperback or at the library and read the series in order. Otherwise, you’ll spend a lot of time wondering how on earth this all developed.

This entry was posted in Mysteries, Southern Fiction and tagged Ann B. Ross, Miss Julia, Mystery. Bookmark the permalink.