Paul O’Connor is on the road this summer, sampling high-quality beers, but avoiding meat. Before he headed west, he left some food for thought for the rest of us. Do not read this review close to mealtime if you still indulge in animal flesh. 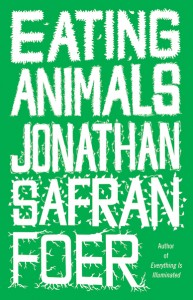 This summer’s reading assignment for incoming freshmen at both UNC-Chapel Hill and Duke is Jonathan Safran Foer’s Eating Animals. Had someone asked me to conduct one of the seminars in which these first-year students will participate – and no one did – I would have started with the following:

“There are chicken salad sandwiches in the back of the room. Anyone hungry?”

I’d be most interested in seeing who, after reading this book, would ever eat chicken again. And I’d be interested in hearing why they would do so. Their rationale might just indicate that the sandwich eaters have developed sophisticated critical reading skills.

Disclosure here: I don’t eat meat anymore. The diet I follow is vegan, for the most part. My rationale is simple: I got tired of having a body-mass index in the “really fat” range. I also had read enough about the factory system of raising animals that I decided I didn’t want those products in my stomach anymore. But I’m not trying to persuade anyone to join me – well, maybe my son, but that’s another story.

Foer has written a startling book, one almost too startling to believe. (A career in political journalism has made me extremely skeptical of startling stories, like the abducted children scare of the 1980s and Y2K.) That’s why I want to hear good critical thinkers tear this book apart. I may not want to eat any chicken again, but I’m startled by the thought that people I love are eating the shit Foer says they are eating – and yes, he says they are eating shit because chickens in factory slaughterhouses are not properly cleaned.

The book is startling in several categories.

1.) Animals in America’s factory husbandry operations are horribly abused. We send people to jail when they treat dogs and cats like this. Why do we tolerate it for chickens, pigs and turkeys?

2.) Animals at slaughter are, in effect, tortured. Often they aren’t properly shocked at the beginning of the process so they are aware of what is happening to them as they are scalded, skinned and butchered.

3.) Enormous farm-animal industries lead to the spread of diseases, such as the various flu strains. And the use of antibiotics on farm animals is causing other health problems for humans.

4.) All of these animals produce an incredible amount of pollution, and the “farms” are not required to have adequate waste-treatment facilities.

5.) The world expends an enormous amount of energy and food resources feeding these animals.

A colleague of mine is also reading the book. Having grown up in Kansas and worked with agricultural interests, he told me this book “is a piece of crap.”

I disagree, but only in part.

Foer spends too much of his book philosophizing when a little of it would have gone a long way. I’m afraid that most incoming college freshmen won’t get to the book’s good parts because they’ll get bogged down. Out of boredom with his philosophizing, I only skimmed the concluding pages.

But Foer’s reporting on factory farming does ring true. A great many other publications have written about the above five points, especially here in North Carolina, where industrial-sized pig and poultry operations flourish.

Some parts of this book are gripping. Some are disgusting. Some are boring. But eat chicken after reading it? Not me.

This entry was posted in Contemporary Nonfiction and tagged Eating Animals, Foer, vegetarian. Bookmark the permalink.