Briar Patch Books presents a new reviewer, Chuck McGathy. The Rev. Dr. Charles McGathy, a retired Navy chaplain, is the pastor of the church where I am a member. Lately, he’s been leading thought-provoking seminars on the history of religion in America, based on the PBS series “God in America” as well as other sources. So, naturally, I thought of him when this new history of the Puritans arrived in my mailbox. Our church is First Baptist in Madison, N.C., a small but progressive congregation that’s affiliated with the Cooperative Baptist Fellowship. 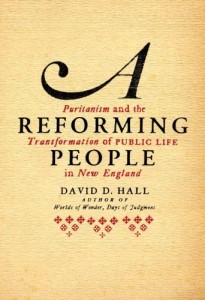 A Harvard professor of New England church history, David D. Hall, has produced a well-documented and scholarly study of the European people who settled in the New England colonies. He takes a decidedly sympathetic view of the “Puritans,” and in so doing seeks to challenge the “entrenched opinion that the movement was authoritarian or theocratic.” That is a difficult task, since there is a growing animosity and resistance that eschews the theocratic tendencies of religious-political groups and individuals within our own society. The question I had as I read Hall’s book was, “Is it fair to compare our experience with authoritarian religion to the Puritan experience?” I was surprised by what I found.

What this book revealed was that Puritan society was in many ways far more progressive than I had imagined. Hall readily admits that in no way could it be characterized as liberal or democratic; however, the Puritans, by abandoning the state church in England, did reform church, civil government and legal codices in some amazing ways that genuinely can be seen as progress.

As a Baptist who is interested in the history of religion in America, I found Hall’s chapter “Godly Rule” the most fascinating. In this chapter he exposes the theological underpinnings that inspired the progress of the Puritans as well as contained the seeds of religious authoritarianism and control. I felt as though I both understood and appreciated the Puritans in a new way, and in so doing I also found a greater appreciation and understanding of my Baptist forebears who were banished from their community.

This book is excellent history, revealing the textures and complexities of human interactions that are too easily lost in the historical stereotyping that ignores the contradictions. Hall has done a great service for those of us who desire to understand the truth about our Christian roots in America.