I am becoming so addicted to listening to books on CD when I drive alone that I find is distressing when I don’t have an audio book with me. Elizabeth Berg is the author of a number of best-selling novels, but I had never read any of her books before I listened to her latest one. 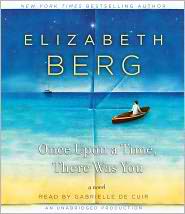 ONCE UPON A TIME THERE WAS YOU. By Elizabeth Berg. Random House Audio. 8 compact discs. 9 ½ hours. Read by Gabrielle de Cuir. $40. Also available in hardback from Random House. 304 pages. $26.

Elizabeth Berg’s new book, Once Upon a Time There Was You, is sufficiently compelling that when listening to it while driving, I sometimes took the longer way home just so that I could finish a chapter.

I had my doubts at first, though.  We learn from the beginning that both John and Irene Marsh had serious misgivings about getting married, but they went ahead anyway. Both had reasons from their childhoods to be wary of marriage, and both were in their mid 30s before they took the plunge.

We learn early also that the marriage, not unexpectedly, didn’t last, that they drifted apart into cold unhappiness before finally splitting. And we learn that the one thing they still have in common is the delightful daughter their union produced, who was about 8 when they divorced and now is 18 and ready to head for college. Sadie is smart, athletic, pretty and an all-around great kid.

Sadie also is understandably chafing at Irene’s unwillingness to relax her smothering control and treat her like the adult she legally is.

Early in the story, Sadie, on one of her twice-yearly visits to John in Minnesota, asks him to help her persuade Irene to allow her to go on a weekend rock-climbing trip with friends when she gets back to California. John does intercede, and Irene grudgingly gives her permission, although she is certain that Sadie will fall and be horribly injured.

That’s when I feared that this was going to be one of those predictable stories: Foreshadowing proves true, Sadie is hurt, estranged parents join forces to help her and find they love each other after all.

Fortunately, Berg is a better and more imaginative writer than that. More than once, she makes the reader think that something predictable is about to happen, and then she throws in a surprising twist of plot.

This is a compelling story about family and other relationships. Berg is very good at getting into the head of Irene, who wants her daughter not to be perfect, but to have a perfect life. And she’s equally insightful about Sadie – her impatience at Irene’s hovering and her determination to live her own life, not the one her mother wants for her. There is also much here that rings true about the ties of shared experience that bind former spouses and old friends. And Berg understands a lot about how aging affects people, especially when it comes to relationships.

I can’t really explain my main complaint about the book without giving away too much of the story. Suffice it so say that Berg tucks in a few loose ends too easily and strains credulity about some of the actions and reactions of police and family members. Maybe I’ve read too many mysteries, which this book is not, but there were a few developments that did not seem believable, or that at least needed some explanation. The distraction took me out of the story from time to time.

For the most part, though, I was glad to share in a difficult but transformative time in the lives of the Marshes and their friends. Gabrielle de Cuir did an excellent job of reading the book.

This entry was posted in Audio Books, Contemporary Nonfiction and tagged Elizabeth Berg. Bookmark the permalink.