Intrigue and danger in Victorian England

Anne Perry is one of the best historical novelists writing today.  Her books are literate, thoughtful, thought-provoking and intriguing. Obviously, she has done a great deal of research, yet her stories are told so naturally that the reader is immersed within the world she creates without being distracted by too much thinking about how she has created it. Perry takes us to Victorian England, or, in the case of her 2009 novel The Sheen on the Silk, to the Byzantine Empire, without belaboring the literary logistics of that journey. We are simply there, in that place, in that time, following with great interest the very real characters who live there.

Happily, she is a prolific writer, with two series set in Victorian England – the William Monk series, and that featuring Charlotte and Thomas Pitt. She also has written eight short Christmas novels, which have become an eagerly anticipated holiday tradition. I have not read her World War I novels – she has written five of those – but they are on my to-read list. 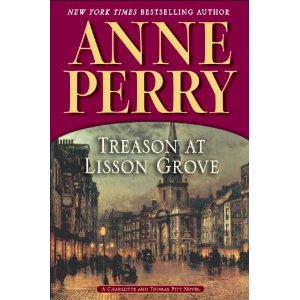 This book starts with a mad chase through the streets and alleys of London, and ends – well, I can’t tell you where it ends without spoiling some of the story. Suffice it to say that the rest of the novel lives up to its dramatic beginning.

In that opening mad chase, Thomas Pitt, who began working for the British Special Branch after he was forced out of the Metropolitan Police, is one of two men in hot pursuit of someone who has agreed to provide crucial information about an anti-government plot. Why is the informant fleeing them? Pitt finds him moments too late, his throat cut. Gower, the younger man working with Pitt, recognizes the assailant, and the two begin to pursue him. This chase takes them to the coast of France, without time to let their superiors or Pitt’s wife, Charlotte, know that they are going.

As Pitt tries to make sense of what’s happening in France, Victor Narraway, the man who brought him into Special Branch when he lost his police job, faces his own crisis. Narraway, accused of embezzling government funds, is removed from office. Not knowing what else to do, Narraway describes his plight to Charlotte Pitt, a woman he knows to be intelligent and often helpful in her husband’s cases.

Partly because she wants to help Narraway, but even more because she realizes Pitt’s future in Special Branch is tied to that of his mentor, Charlotte agrees to travel with him to Ireland, where he believes he will find the person who has framed him. The Pitts’ former maid, Gracie, helps Charlotte find a new maid with whom she can trust her two children. And then Charlotte heads for Ireland with Narraway, posing as his sister.

But is it just coincidence that Narraway is disgraced and removed from office while Pitt is in France? When Pitt returns to England, he finds Narraway’s job thrust upon him. Worried, Pitt does not believe that he has the experience or temperament to be effective in that role.

Although Narraway’s problems are quite real, and become even more serious because of events in Ireland, the suspicion grows that there is a much more ominous threat brewing. The unrest and anti-government sentiment that are spreading across Europe may be about to erupt in England in a way that could shake the very foundations of the British Empire.

Who is friend, and who is enemy? How far will the enemies go? Is anyone safe when people believe that their goals justify any actions?  And as major events play out on the national and international level, what will it all mean for Charlotte, Thomas and their young family?

Yes, the reader finds that the deadly pursuit through the streets of London is only a warm-up for the desperate race against time as the book builds to a memorable conclusion.

What a delight to travel once again with Anne Perry to Victorian England, a world that she deftly shows us is so different from our own, and yet so similar.