Murder at the salvage yard

Here’s a remarkably good first novel by the latest addition to my list of outstanding North Carolina authors. 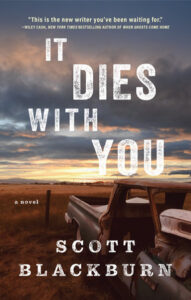 When Hudson Miller was just a boy, his dad “dismantled” what had been a reasonably happy, church-going, middle class North Carolina family by getting way too fond of the wife of a younger couple who lived nearby. After months of bitter quarrels and tears, Hudson’s mom divorced his dad and moved into an apartment. Tammy’s husband left her and moved away.  His dad married Tammy, and Hudson became something of a problem adolescent.

So when a call from his dad comes late one night when Hudson’s trying to relax after a difficult shift at work, he doesn’t answer. He doesn’t relent when his dad tries to call a second time.  When he occasionally meets or talks with his father, they have nothing in common. Hudson has no sympathy for his dad’s increasingly belligerent beliefs that everybody is out to get him and all the other people his dad deems hardworking, upstanding Americans. Worst of all, his dad fears, “they” might try to take his guns…

The next day, Hudson gets a call from a police officer in the small town of Flint Creek where he’d grown up, not far from Greensboro, where he lives and works. His dad had been shot to death the night before at the salvage yard he owned.  A robbery, most likely, he’s told.

Hudson’s life has been on a downhill spiral for a while. He’d been piecing together a living as a boxer, trying to qualify for bigger fights that could mean more money and attention, and training kids and teenagers in the afternoons at a recreation center, plus tending bar some nights. When he lands a dangerous punch in a brawl following a fight one night, he derails his boxing career, loses his job at the rec center and becomes notorious on YouTube. He takes on more bartending shifts and also starts working as a bouncer at the bar.

To his surprise and Tammy’s dismay, Hudson soon learns that his dad has willed him the salvage yard and three small rental houses.

As he tries to figure out what to do with his new business, Miller’s Pull-a-Part, Hudson discovers there was quite a bit more going on there than selling car parts and scrap metal – and none of it good. His dad seems to have been involved in illegal gun smuggling, for one thing. Things get worse as a body turns up at the salvage yard. Hudson tries to figure out the dark secrets hidden in Flint Creek. He is joined in his quest by his dad’s former employee, gruff, beer-swilling 71-year-old Charlie Shoaf, and Lucy Reyes, a tough and determined teenage girl on a mission to find justice for her missing brother.

Scott Blackburn’s debut novel is remarkably well done. The mystery, the amateur but determined detective work and the hidden side of a seemingly placid small town are all well told. But there’s so much more here. We have complex, well-developed characters, starting with Hudson, who is trying to figure out what he wants and how to rebuild his life. Just as in real life, in Flint Creek, people are neither all bad nor all good, but some certainly have a definite bent in one direction. There’s also good insight into small-town life, where people who know your family or knew you when you were growing up think they know a lot more about you than they do. And, despite some grim developments, there is humor, and there are moments that might restore some of your faith in humanity.

Blackburn, a University of North Carolina at Greensboro graduate, lives in High Point.

Read this book.  Then join me in waiting eagerly for Scott Blackburn’s next novel.