Mystery, history and the lives of women 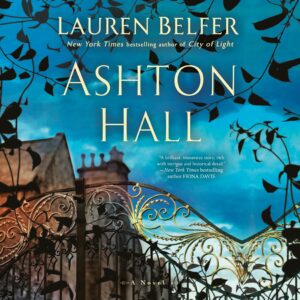 Don’t start listening to (or reading) this book unless you have some time to spare. Once you start, you won’t want to stop.

Hannah Larson is an art historian who has put her career on hold because her young son, Nicky, needs lots of attention and special care. Although not diagnosed with a specific disorder, he is highly impulsive and often has violent outbursts that can get physical. Hannah has had to take on the role of full-time mother while her husband, Kevin, pursues his career and earns the money that pays for their Manhattan lifestyle.

As Lauren Belfer’s latest novel opens, Hannah, with Nicky at her side, is heading to England to spend the summer with her beloved uncle, who rents an apartment at Ashton Hall, an ancient mansion in Cambridgeshire.

Hannah is trying to deal with the recent shock of discovering that Kevin is having a long-term affair, one that he’s not willing to give up. She welcomes the chance to spend months away from him, hoping she can think things through.

Soon after they arrive, Hannah’s uncle, who has serious medical problems, leaves with his caregiver for a new treatment possibility in the U.S. Hannah and Nicky are on their own, making new friends and exploring the historic house and grounds.

Nicky takes exploring to a new level, venturing on his own to an abandoned wing of the house, where he stumbles upon – and into – a walled-up room. In the room is a corpse.

Archaeologists set to work to identify the corpse and figure out why it is there. Before long, the body is determined to be Isabella Cresham, a member of the family that lived in the house during the Elizabethan era. Some of the artifacts found suggest that Isabella was a practicing Catholic during a time when they were persecuted.

Hannah gets increasingly drawn in to the mysteries surrounding Isabella and her life and death. She helps with research, examining ledgers and sketchbooks to discover details about life at the manor, including Isabella’s role.

Belfer obviously has done her research well, and the novel is a delight for Anglophiles and people interested in history and archaeological research. She does a wonderful job of working these details in while keeping the narrative going. She manages to tell Hannah’s present-day story as well as Isabella’s 16th century one, and readers see that Hannah is fascinated partly because she begins to feel a bond with that imprisoned woman. Hannah, afraid that she must stay in her marriage to protect her son, thinks about the difficult choices that even modern women must make as they balance personal independence with family demands.

Belfer deals with all these issues with a deft touch, letting her well-told story stand on its own, never becoming preachy or heavy-handed. The book is a historical mystery, a contemporary tale and a reflection on the lives of women – a rich, rewarding story.

Jayne Entwhistle and Kristen Sieh do a marvelous job with the audio version.