Need a vacation novel, one that’s fun and easy to read? Paul O’Connor has a suggestion. 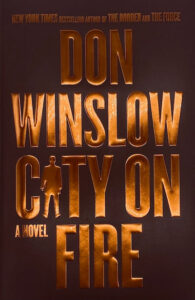 Danny Ryan knows trouble when he sees it.

So, when a beautiful woman emerges from the water along the Rhode Island shore, he knows no good will come of it. There with his wife and two other couples for their group’s annual two-week August vacation, even Ryan can’t foresee how much trouble Pam, the real estate agent who has recently arrived from Connecticut, will start.

City on Fire is the first book in Don Winslow’s latest trilogy. Set in Providence, R.I., it is the story of two mob families, one Irish, one Italian, co-existing under a more than 20-year-old peace. The Irish get the docks, the longshoreman’s union, a few neighborhoods. The Italians, a much bigger family, get other neighborhoods and other criminal enterprises. At the end of the summer, the two families gather at the shore for a feast.

And into that feast blunders Pam, a product of affluent Greenwich, top-notch schools and an economic class with social mores at odds with those of the families with whom she is mixing.

Pam doesn’t set out to create trouble. To the contrary, she makes a protest that she is entirely justified in making, even in the 1986 setting of the party. She had failed to see, however, the ramifications of her complaint. She doesn’t seem to understand that some things are best left unsaid in front of mobsters.

One thing leads to another and, pretty soon, Providence is on fire, a full-fledged mob war in a city with considerable mob credentials. Along with the mob war, there are intra-family and inter-racial story lines. There’s some sex talk, both straight and gay.

Winslow is known as one of America’s best crime novelists, and his trilogy on the Mexican drug cartels was terrific. His writing is clear and fast-moving. He tells a great story, and he does his research. He is also known for Don Winslow Films, which produces numerous social media videos decrying the current autocratic drift of our nation. His latest, on gun violence, are chilling.

Anyone who has read mob books before, or seen mob movies, is unlikely to learn anything new here about mob culture: aspects of loyalty, revenge, secrecy, etiquette and even respect. So, reading City on Fire really is just a chance to escape and enjoy a good read.

The central take, however, is that bad things can spiral out of control: A drunk, a beautiful woman, an indiscretion, an overreaction, and then escalation and more escalation. Behind all of it, the sides see opportunity, and there’s nothing like opportunity to draw in outside forces.

City on Fire isn’t The Godfather, nor is it Wiseguy, the source for the movie Goodfellas. But it is an easy and engaging read. And for those who haven’t read Winslow’s work before, my warning is that his books are hard to put down.