All this and COVID too

Bob Moyer reviews a Michael Connelly detective thriller that came out late last year. If you missed it in the holiday/pandemic craziness, you’ll thank him. 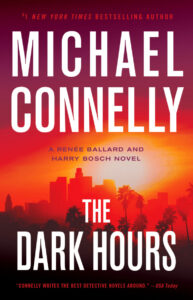 She hates taking her mask up and down for a sip of coffee, she picks her desk on the night shift to avoid cops who don’t cover their mouths, she turns away when she talks to witnesses, she had COVID in November, and on New Year’s Eve, she’s not sure she’s immune.

She’s who Harry Bosch used to be before he retired — the rule breaker, the loner, the relentless cop who keeps after the truth until they get it. Author Connelly has come up with a worthwhile female to step into the place Bosch occupied. Bosch is still around in this latest procedural by the acclaimed master, but he’s a supportive sidekick. Ballard needs one, because Connelly has loaded her down with problems, and the pandemic is just one of them.

Connelly works his magic here, with the way he weaves the pandemic into her daily life. It’s just one more stress added to the lack of confidence the public shows toward cops since George Floyd, the burnt-out cops who just shuffle through their days, and, of course the procedures and politics of the L.A. Police Department. On top of everything else, Ballard ends up working two cases at once.

The first case looks like a pair of serial rapists. She’s supposed to pair up with a detective from the sex crimes squad, but the woman’s a slacker. Ballard ends up doing both their jobs. She also picks up a murder that looked like an accident — gunfire on New Year’s Eve — but Ballard establishes that it was a hit. She manages to keep from handing it over to the daytime murder squad until she basically solves the crime, while also figuring out the m.o. of the rapists. To do all this, she works both night and day, and has to call on Bosch for backup. Stretched, sleep-deprived, she makes some questionable, out-of-line decisions that get her both suspended and almost killed. Those scenes are some of the best Connelly has come up with in recent books.

Connelly leaves both Ballard and the reader wondering what will she do in the next installment — keep working for the department, or go to work with Bosch. Either way, the reader wins.