Courage and care under fire 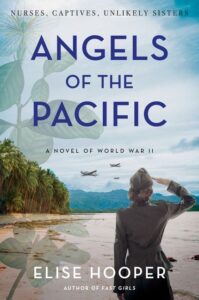 Maybe it’s just coincidence, or maybe there’s renewed interest among Americans in World War II. Whatever the reason, this is the second historical novel about Americans in World War II that I’ve read in as many months. Both books are well done, and both are more thoughtful and revealing about the profound effects of war on individuals than many of the World War II action books and movies I’ve encountered over the years.

The first was Still Points by Barry Lee Swanson, an author who lives in North Carolina. As I said in a review that ran in the Greensboro News & Record and the Winston-Salem Journal (https://journalnow.com/entertainment/books/book-review-still-points-a-poignantly-told-war-story-by-north-carolina-author-barry-lee/article_faefd844-a61d-11ec-82fc-5301bdd4d207.html) on March 18, Swanson artfully draws on the real story of his wife’s late uncle, as recorded in his journal and letters home. The result is a well written, gripping and poignant book that reminds us of the hardships and sacrifices that the generation of Americans who came of age during World War II experienced.

Elise Hooper’s Angels of the Pacific is also based on true stories, although not as directly as Swanson’s. In a Q&A  at book’s end, Hooper says that she was inspired by the service of her grandfather in the Navy during the war. Like so many World War II veterans, however, her grandfather rarely talked much about his war days, except in general terms. Hooper began researching the war, and in accounts of the U.S. Army and Navy nurses who eventually came to be known as the Angels of Bataan and Corregidor, she found her story.

It’s a good story, and she tells it well, deftly alternating between the viewpoints of Tess Abbott, am American Army nurse, and Flor Dalisay, a Filipina university student who lives with her family in Manila.

Tess, an orphan raised by her older sister, joined the Army nursing corps in hopes of adding a little adventure to her life and escaping the hardships of the Great Depression. She’s enjoying life in the beautiful Philippines, and her shy personality is beginning to blossom amid the friendship of other young nurses. But news of the Japanese bombing of Pearl Harbor is quickly followed by devastating Japanese attacks on the American-controlled Philippines.  To their horror, the nurses realize they are being abandoned when Gen. Douglas MacArthur is forced to leave the islands.

Through the attacks, Tess and the other nurses keep working, under great hardship, until they are captured by invading Japanese troops. Eventually, they are moved to an internment camp for prisoners of war in Manila, where they continue working as best they can while suffering cruel and humiliating treatment, starvation and disease. Four years pass before they are liberated after American troops retake the Philippines amid fierce fighting.

Flor, meanwhile, not content to stand meekly by while the Japanese take over her homeland, finds ways to help the growing underground resistance efforts. Risking her own safety and even her life, she bravely does what she can.

The two young women’s paths eventually cross, brought together by their humanitarian efforts and their mutual desire to defeat the Japanese.

This is a novel of hardship, heroism and the horrors of war for civilians as well as the military. This is also a novel of heartwarming stories of brave young women who find friendship and even love in the midst of those horrors.

Like Still Points, Angels of the Pacific educated me even as it provided compelling reading.