A terrifying and delightful collaboration 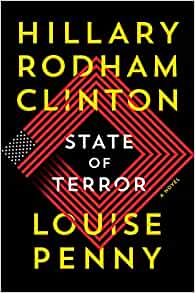 I couldn’t get my hands on this book – a political thriller – fast enough. Louise Penny is one of my favorite all-time crime/mystery writers, and certainly one of my favorites who’s writing currently. Her Inspector Gamache series with its home setting in the Quebec village of Three Pines deftly combines complex crime fiction with wise insights into the human condition. And Hillary Clinton, with decades of experience at the highest levels of U.S. and international politics, has a great deal of insider knowledge and insight.

Plus, they both know the challenges of being a successful woman in today’s world.

I’m happy to report that State of Terror lived up to my hopes and expectations.

As it turns out, I learned from reading the afterword at the end of the book, Penny and Clinton also have a close friendship that predates this collaboration. 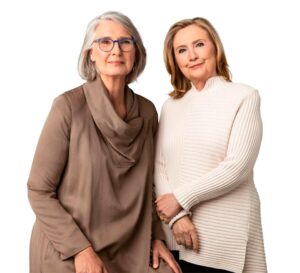 Our hero, Ellen Adams, is the secretary of state in the new administration that follows the disastrous one of Eric Dunn, whose incompetence and erratic behavior have left the United States with a sadly diminished standing in the world. (Sound familiar?)  Ellen understands that the new president did not choose her because he admires or likes her. After all, she had used the media empire she controlled to support his opponent for his party’s nomination.

She knows that he selected her largely so that he could control her and mute her criticism, and, she quickly begins to suspect, perhaps also to expose her shortcomings in a difficult job. Yet she accepted, turning the media business over to her daughter, Katherine, because she wanted to help her country heal and begin to repair its relationships with the rest of the world.

Things get off to a rocky start, made worse by terrorist attacks in major European cities. Then a young foreign service officer on the Pakistan desk realizes, too late, that the suspicious message she’s received from an anonymous source is a warning about more attacks.

As things quickly develop, Ellen and others in high places begin to understand that the real threat is much bigger, involving international intrigue; the fraught relationships among Pakistan, Iran and Afghanistan; the Russian mob, and most frightening of all, nuclear weapons in the hands of terrorists.

Everything is complicated by the weakened state of and disarray in the United States after four years of the Dunn mis-administration.

The prospect indeed produces a state of terror, and the novel is made even more gripping by the realization that while it may be fiction, what plays out is frighteningly credible in today’s world.

Realizing the urgency, Ellen assembles a team that includes her daughter; her close friend and trusted advisor; and the young foreign service officer. They take bold take action where and as they believe it’s needed. Meanwhile, Ellen’s son, a journalist, is also deeply involved – and in danger.

It’s a fast-packed thriller, with plenty of red herrings and people who are not what they seem. It can be harder for the reader than it is even for Ellen to figure out who can be trusted and who’s telling the truth. That’s all the more reason to keep reading.

On one level, State of Terror is also a celebration of women – the strength of their friendships, and their ability to get things done by using their brains and intuition rather than brute force.

Some of Ellen’s bold actions may strain credulity a bit – she pursues several lions right into their dens. Urgency trumps vanity as she takes advantage of the tendency of some of these powerful men to write her off as a frazzled 50-something woman who’s in way over her head. By the end of the book, she comes across as something of a superhero traveling the world in Air Force Three, and there are unexpected moments of humor.

The story works beautifully, though. It helps that Clinton obviously knows what she’s writing about. And, like Penny’s Gamache novels, this story is leavened by very human relationships demonstrating the importance of family and of love.

There’s also a strong undercurrent of belief in the rightness of the ideals and principles of the United States, even during the worst of times.