Mastodon, big snakes and lots of laughs in Florida

*This is a review of the hardback novel, published last year. The photo is of the cover of the paperback edition, which has a new epilogue written after last year’s election and some of the events that followed.

Every now and then, Tom Dillon, a friend from long-ago newspaper days, is moved to send a book review. I’m always delighted. 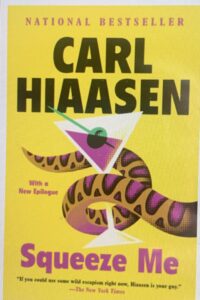 I don’t know if Carl Hiaasen voted for Donald Trump last year or not, but if he did, it’s reasonable to say he could be forgiven. Trump has been a real gift to Hiaasen’s satirical fiction over the past few years, and there’s no greater evidence of that than this hilarious Florida spoof-novel.

I read it in no more than a few hours and laughed all the way through it. And so have others, notably novelist James Patterson, who said of it that Hiaasen “remains the undefeated, unscored-upon conscience of Florida, maybe the conscience of the whole country.”

Indeed, some people are saying that Hiaasen has become the new-age version of the late Edward Abbey, with plots just as outlandish and characters just as memorable. One of those is Clinton “Skink” Tyree, a dropped-out former governor of this ungovernable state – a character who has been compared to Abbey’s famous arch-trickster George Hayduke. That’s high praise.

I’m not going to tell you a lot about the plot of this book, but I should post one warning: Don’t read it if you are squeamish in the presence of giant snakes like the Burmese pythons that have taken over some habitats in the Florida Everglades; there are a number of these snakes here, apparently the results of well-meaning people releasing pets into the wild after they grew too big.

I also need to make it clear that our U.S. ex-president is not mentioned in the book. Suffice it to say that the president in this book – code name “Mastodon” – and his wife – code name, “Mockingbird” – have taken up residence in the Sunshine State amid concern about the disappearance of a wealthy socialite, a big fan of Mastodon.

There’s no obvious connection, of course, but in due time one appears, thanks to the work of one Angie Armstrong, a wildlife wrangler whose job includes removing errant skunks, raccoons, possums and even snakes from homes and businesses and releasing them into the wild. She’s really the main character, along with a clued-in lawman and one unfortunate immigrant.

There’s one sobering aside which should be mentioned in this review. That is that Hiaasen dedicated the novel to his younger brother, Rob, who was killed during the Capital Gazette shooting on June 28, 2018, in Annapolis, Md. That’s a reminder of the serious journalism this country is so in need of.

But along with that reminder, we can remember to laugh when it’s called for and to skewer the powerful when they need skewering. That’s what Hiaasen has been so good at in the past. This novel shows he’s still got it.

One response to “Mastodon, big snakes and lots of laughs in Florida”