When murder and fiction collide 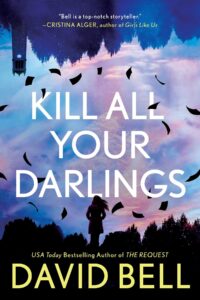 David Bell’s latest thriller has all the ingredients for a great summer read. The fast-moving plot is gripping, with plenty of twists and turns, and more than a few surprises. It’s set in academia, at a fictitious Kentucky Commonwealth University. And the story’s mystery and mayhem are firmly grounded in the real and timely issue of sexual harassment on campus.

Plus, because it’s a book about an English professor who teaches creative writing, it’s also a book about the writing process and how fiction can be an effective way of voicing real-life stories. It helps that Bell is a professor of English at Western Kentucky University in Bowling Green, Kentucky, so his insights into the academic scene make the book come very much alive. We see the sometimes-cutthroat competition among faculty and the ways unscrupulous professors can take advantage of vulnerable women students.

Our protagonist, Connor Nye, is an English professor at Kentucky Commonwealth U. who’s been struggling in many ways since his wife and son died in an accident five years earlier. Now, though, his life and career are looking brighter because his newly published novel, a crime thriller, is doing well – relieving him of the intense pressure to publish something noteworthy so that he can get tenure.

Things are looking brighter, that is, until the sudden appearance at Connor’s home of Madeline O’Brien, a former student who disappeared mysteriously two years earlier and had been presumed dead. With her, Madeline has a manuscript she wrote – a manuscript of what is now the novel Connor has passed off as his own. Madeline threatens to expose him if he doesn’t give her all the proceeds from the book.

Things quickly get worse. As people begin to read the book, it’s clear that the story bears a strong resemblance to a real crime that shocked the community two and half years earlier, the murder of a young married woman. That murder has gone unsolved, and the local police take a keen interest in Connor. Because Connor was so wrapped up in his personal problems at the time, he had not paid attention to coverage of that murder and is unprepared for what is happening.

Connor finds himself in a nearly impossible predicament. If he comes clean about having plagiarized the novel, his career at the university will be ruined. But if he doesn’t, he might find himself on trial for murder.

Trying to protect his academic reputation and job, Connor hopes to find the real murderer.

Unfortunately, the real murderer doesn’t intend to let that happen.

Bell skillfully moves back and forth between past and present, gradually revealing more of the truth, until his story reaches a dramatic and satisfying conclusion. Unlike some thrillers, Kill All Your Darlings offers a main character who wins our sympathy as well as our attention; we care about Connor despite – or maybe because of – his lapses and mistakes.

Once started, you’ll finish this story quickly. It’s ideal for the beach, a long plane ride or just a slow summer day at home.

This entry was posted in Mysteries, Thriller/Suspense, Women's Fiction and tagged David Bell, Kill All Your Darlings, thriller, women's fiction. Bookmark the permalink.